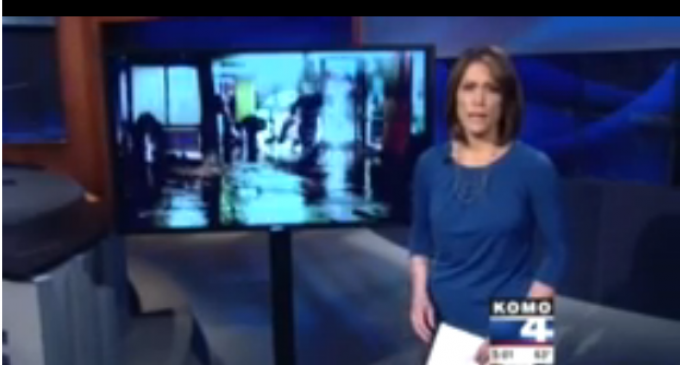 Seattle police officer Garth Haynes has been cleared of wrong-doing because a concussion made him stomp on a handcuffed man's head in 2010. Originally charged with fourth-degree assault and suspended from his dept for excessive force, Haynes was later found innocent, telling jurors that he felt “dazed” during the altercation. A doctor who was hired by city attorneys stated that Haynes had received a “low-level concussion” that could have left him ignorant of his own actions. Police Chief Bailey reversed his decision to suspend Haynes because of the jury's verdict. However, according to city spokeswoman Kimberly Mills, first responders never found any evidence that Haynes ever had a concussion to begin with. “There was no diagnosis of a concussion when Officer Haynes was evaluated by medical personnel following the incident,” Mills said. Ever heard of a concussion making someone excessively violent towards a non-threatening person?

According to reports, Seattle police officer Garth Haynes, who was off-duty and out of uniform at the time, began fighting several men who confronted him as he violently restrained a woman outside a bar. Haynes was charged with fourth-degree assault for stomping the man’s head after police arrived but was later found innocent when he told jurors that he felt “dazed” during the incident. Haynes also told the jury that he believed the woman on scene had stolen his coat and that he never intended to stomp on anyone. Although acquitted of assault in 2012, Haynes received a 10-day suspension from his department for excessive force, which was immediately appealed by The Seattle Police Officers Guild. After reviewing medical records from the incident, a doctor hired by city attorneys stated that Haynes had received a “low-level concussion” that likely made him not understand his own actions. “It is possible that the concussion could account for Officer Haynes’ behavior in the immediate aftermath of the incident,” the doctor’s report said. With this “evidence,” the city was able to convince Interim Police Chief Bailey to reverse the suspension and remove the excessive force charge from Haynes’ record. City attorneys even accused the three men from the 2010 incident of racism in the appeal, alleging that they approached Haynes because he was black, not because he was grabbing a woman. “I’m glad to see that the city attorney’s office had an ah-ha moment and realized, and in fact agreed with, what we’ve said all along, that Officer Haynes was the victim of a racially motivated beatdown,” Seattle Police Officers Guild President Ron Smith said. According to city spokeswoman Kimberly Mills, first responders never found evidence that Haynes had received a concussion to begin with. “There was no diagnosis of a concussion when Officer Haynes was evaluated by medical personnel following the incident,” Mills said. Despite Mill’s evidence, Seattle Mayor Ed Murray announced during a Monday press conference that he would not challenge the city’s decision, but would work to fix police corruption issues. “We have a complaint process, an appeals process, and a punishment process that is broken,” Murray said. Tim Leary, a lawyer who previously represented the man who was stomped on, was seemingly shocked at the city’s decision. “I think there are significant questions where an officer is claiming a concussion caused him to be confused and lack the ability to control his actions when he’s stomping on the head of a hand-cuffed suspect he’s upset with,” Leary said. Chief Bailey’s decision comes only days after more than 125 Seattle officers filed a private lawsuit against city officials and the U.S. Justice Department for attempting to stop them from regularly using violence.