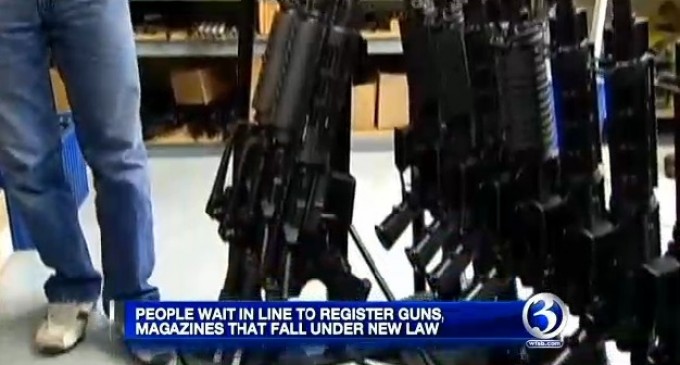 Connecticut residents must register their semi-automatic rifles and high-capacity magazines before Jan. 1, 2014 or they would become a felon.

So you can become a criminal in Connecticut for adhering to the Constitution.

Connecticut residents waited in long lines on Thursday to register their firearms and high-capacity magazines before the state’s new gun laws go into effect on Jan. 1, 2014.

WFSB-TV reports that a “long-line of people” stood outside the Public Safety Building in Middletown, Conn., all day to register semi-automatic rifles and high-capacity magazines. Several residents were upset with the “unconstitutional” requirement, while at least one person didn’t appear to mind.

“I understand why they’re doing it, but I don’t think it’s constitutional,” resident Scott Boccio told WFSB-TV as he was registering his guns.

Charles Gillette, who was registering magazines, told the news station that he would have a problem with it if the state was trying to ban the magazines or firearms, but said “if they want to just know where they are, that’s fine with me.”

However, not one gun owner who was registering firearms or magazines said they think the new laws will reduce gun violence.

“If people are going to do things illegally, they’re not going to be here registering their gun,” Jared Krajewski, another resident registering firearms, said.

For now, in Connecticut, the law is the law. The new gun control measures were put into place following the tragic school shooting in Newtown, Conn.