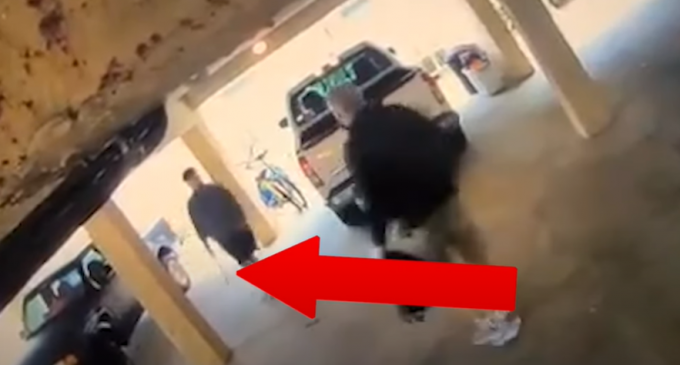 A perilous confrontation was caught on camera in Jacksonville Beach, Florida when a gun owner walked up on a man breaking into his truck as he was leaving his condo.

The truck owner, Steve Fitzgerald, confronted the burgler, who pulled out a metal pipe that was part of a car jack.

Fitzgerald can be seen with his hand in his right pocket, where he apparantly had his pistol. He has been a gun owner for 20 years and has a Florida concealed carry license.

As the burglar moved toward Fitzgerald he backed away, only to pull out the gun to keep the attacker at bay. Fitzgerald likely gained distance and dropped his items in order to get both hands on his gun.

“Get out of here right now, get out of here and put your hands up!” Fitzgerald is heard yelling on the video. “Somebody call 911!”

The defender was certainly within his rights to take out the attacker immediately. But it is a monumental decision to take a life. In this outcome, the criminal was captured.

What would you have done?