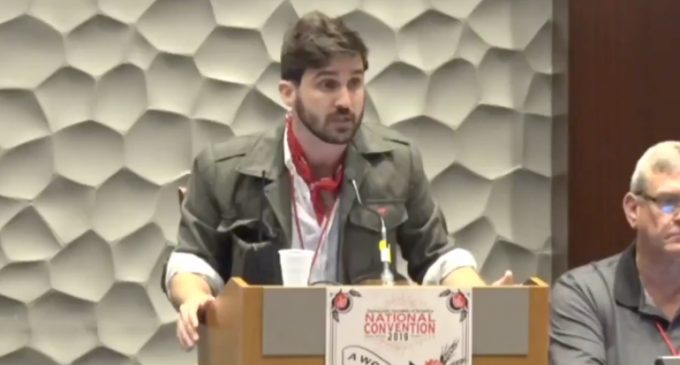 It was quite the triggerfest at the Democratic Socialists of America (DSA) National Convention in Georgia this weekend. Footage shows multiple instances of unproductive back-and-forths between attendees as complaints ranged from “sensory overload” from people whispering in the room to upset over the use of the word ‘guys’ to address the crowd.

“Uh, quick point of personal privilege, um guys,” said someone who identified himself as James Jackson from Sacramento. “I just want to say, can we please keep the chatter to the minimum? I’m one of the people who’s very, very prone to sensory overload,” he said. Others raised their “Jazz hands’ in agreement instead of applauding.  The convention bans applauding in favor of ‘Jazz hands’, which are considered less ‘triggering’ to those with sensitivities to ‘loud’ sounds.

“There’s a lot of whispering and chattering going on. It’s making it very difficult for me to focus. Please, I know we’re all fresh and ready to go, but can we please just keep the chatter to a minimum? It’s affecting my ability to focus,” Jackson said.

Well, Jackson made the mistake of addressing everyone as ‘guys’, which triggered someone else.

“Please do not use gendered language to address everyone!”

Jackson, however, would soon come back for another round.

“I have ALREADY asked people to be mindful of the chatter of their comrades who are sensitive to sensory overload,” Jackson said. “And that goes DOUBLE for the heckling and the hissing. It is also triggering to my anxiety. Like, being comradely isn’t just for like, keeping things civil or whatever. It’s so people aren’t going to get triggered, and so that it doesn’t affect their performance as a delegate.”

Jackson said that while “your need to express yourself is important,” it does not “trump” his own personal needs.