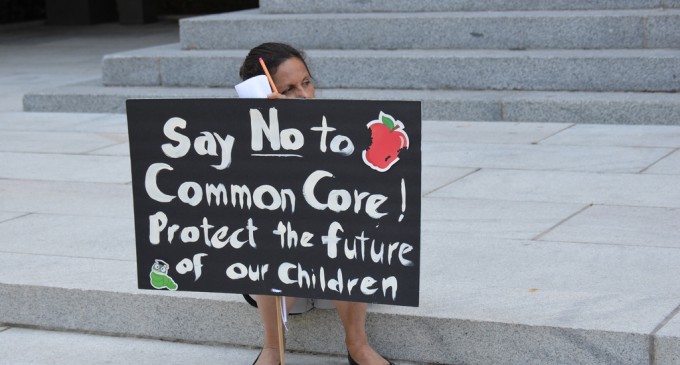 This child pornography is protected because it resides between the pages of a novel, in this case from the novel “The Bluest Eye”.

Following are graphic and explicit excerpts from The Bluest Eye, which is on the Common Core’s list of exemplar texts for 11th graders. If you are easily offended you may want to skip them and go straight to the story.  (Note from editor:  Even heavily edited, this is still very graphic.)

Pages 162-163:  “A bolt of desire ran down his genitals…and softening the lips of his anus. . . . He wanted to f*** her—tenderly. But the tenderness would not hold. The tightness of her vagina was more than he could bear. His soul seemed to slip down his guts and fly out into her, and the gigantic thrust he made into her then provoked the only sound she made. Removing himself from her was so painful to him he cut it short and snatched his genitals out of the dry harbor of her vagina. She appeared to have fainted.”

Page 174:  “He further limited his interests to little girls. They were usually manageable . . . His sexuality was anything but lewd; his patronage of little girls smacked of innocence and was associated in his mind with cleanliness.” And later, this same pedophile notes, “I work only through the Lord. He sometimes uses me to help people.”

Page 181:  “The little girls are the only things I’ll miss. Do you know that when I touched their sturdy little t*** and bit them—just a little—I felt I was being friendly?—If I’d been hurting them, would they have come back? . . . they’d eat ice cream with their legs open while I played with them. It was like a party.”

Pages 84-85:  “He must enter her surreptitiously, lifting the hem of her nightgown only to her navel. He must rest his weight on his elbows when they make love, to avoid hurting her breasts…When she senses some spasm about to grip him, she will make rapid movements with her hips, press her fingernails into his back, suck in her breath, and pretend she is having an orgasm. She might wonder again, for the six hundredth time, what it would be like to have that feeling while her husband’s penis is inside her.”

Pages 148-149:  “With a violence born of total helplessness, he pulled her dress up, lowered his trousers and underwear. ‘I said get on wid it. An’make it good, n*****, Come on c***. Faster. You ain’t doing nothing for her.’ He almost wished he could do it—hard, long, and painfully, he hated her so much.”

I understand that after reading those excerpts a lot of you may be angry that this is approved for reading in any school. I could probably end the article here.

However, there are many things that need to be addressed and I have detailed for you here with much help from Jill Manning, PhD.

Adams 12 5 Star School District is the 5th largest school district in Colorado and has transitioned to the new Common Core standards. The book, Toni Morrison’s 1970 novel, “The Bluest Eye,” is among Common Core’s exemplar texts for 11th graders.

I was recently afforded the opportunity to discuss the book with Dr. Jill Manning, a Licensed Marriage and Family Therapist. She has been involved in social policy and research and has testified for legislators on these issues. Dr. Manning is also a former Social Science Fellow at the Heritage Foundation. She knows what she’s talking about and she also happens to be a concerned mother.

Obviously the reason behind some parents calls for removing the book are the graphic depictions of incest, rape and pedophilia. And not just that, the book actually lets the reader see the depictions from the perpetrators point of view.

In fact, the author of the book, Morrison, says that she wanted the reader to feel as though they are a “co-conspirator” with the rapist. She took pains to make sure she never portrayed the actions as wrong in order to show how everyone has their own problems. She even goes as far as to describe the pedophilia, rape and incest “friendly,” “innocent,” and “tender.” It’s no wonder that this book is in the top 10 list of most contested books in the country.

The Bluest Eye is the story of Pecola Breedlove, a young black girl, who prays every day for beauty: for the blond hair and blue eyes that she believes will allow her to fit in. As her life begins to disintegrate in the face of adversity and strife, such as being raped by her father and beaten by her mother, she finally appeals to Soaphead Church, a pedophile, to help her attain blue eyes. After being impregnated by her father, she loses her baby and ultimately loses her mind.

Dr. Manning is one of 5 people to introduce research-based arguments to remove this book from approved literature in the classroom. Among the five people were two concerned parents who had children that were negatively impacted by the book, an English teacher, a lawyer, and Dr. Manning.

The parents who are actively petitioning the school board to have it removed from the classroom do not want a complete ban on the book nor its removal from the school; rather they would like it to be removed from the approved reading list in the classroom, where students spend three to four weeks reading and discussing, in depth, the developmentally inappropriate material.

There are people out there advocating to let this book remain in the classroom because 11th and 12th graders have the ability to read this material especially those in Advanced Placement classes. As Dr. Manning points out, there is a huge difference between being labeled a mature reader, as in one that is technically capable of reading challenging novels, and biopsychosocial maturation. One of the top reasons behind choosing this book is the fact that it is on the Common Core Standards list of exemplar texts. It aligns with the standards and meets the course objectives and needs of students.

Children are simply not mature enough to process the violent, incestuous sex scenes in the book. And yes, high school kids are still considered children! They are minors. They are not adults, and they are not in college. We need to use some common sense when choosing texts to be studied in the classroom. Children’s developing brains do not need to be assaulted with this notion of sexual violence. Educators are supposed to protect children from violence.