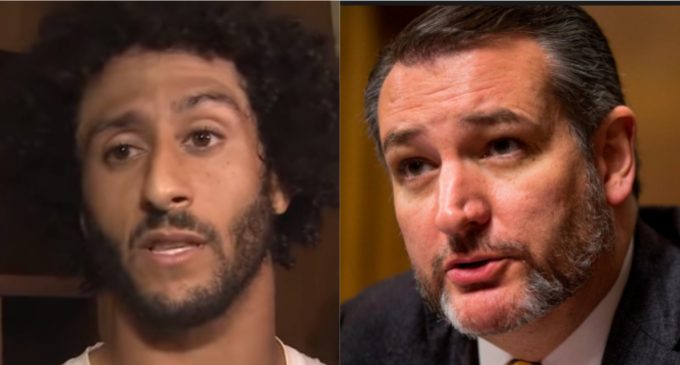 While many were celebrating our Independence Day yesterday, former NFL quarterback Colin Kaepernick decided to tweet a video that sought to condemn the United States as the worst nation on Earth.

The multi-millionaire posted a pre-Civil War quote by Frederick Douglass with a one-minute video containing images of slavery, the KKK, lynchings and police abuse of African-Americans with a voice-over reading from Douglass’ 1852 speech on slavery and the Fourth of July.

“What have I, or those I represent, to do with your national independence? This Fourth of July is yours, not mine…There is not a nation on the earth guilty of practices more shocking and bloody than are the people of these United States at this very hour.” – Frederick Douglass

This quote is lifted from the speech “What to the Slave is the Fourth of July?” was given in Rochester, New York on July 5, 1852. It's taken completely out of context, prompting Sen. Ted Cruz to call out Kaepernick.

“You quote a mighty and historic speech by the great abolitionist Frederick Douglass,” Sen. Cruz writes in response, “but, without context, many modern readers will misunderstand.”

Cruz goes on to acknowledge that slavery was an “abomination” in the U.S. but was eliminated through the efforts of Douglass and “so many other heroes.”

The senator then asserts that Douglass “was not anti-American; he was, rightly and passionately, anti-slavery.”

(2) Douglass was not anti-American; he was, rightly and passionately, anti-slavery. Indeed, he concluded the speech as follows:

As evidence, Cruz quotes another portion of the same Douglass speech:

“Allow me to say, in conclusion, notwithstanding the dark picture I have this day presented, of the state of the nation, I do not despair of this country.

“There are forces in operation, which must inevitably, work the downfall of slavery. ‘The arm of the Lord is not shortened,’ and the doom of slavery is certain.

“I, therefore, leave off where I began, with hope. While drawing encouragement from ‘the Declaration of Independence,’ the great principles it contains, and the genius of American Institutions, my spirit is also cheered by the obvious tendencies of the age.”

After quoting Douglass, Cruz then writes: “Let me encourage everyone, READ THE ENTIRE SPEECH; it is powerful, inspirational, and historically important in bending the arc of history towards justice.”

Let me encourage everyone, READ THE ENTIRE SPEECH; it is powerful, inspirational, and historically important in bending the arc of history towards justice: https://t.co/il9WNrmxho