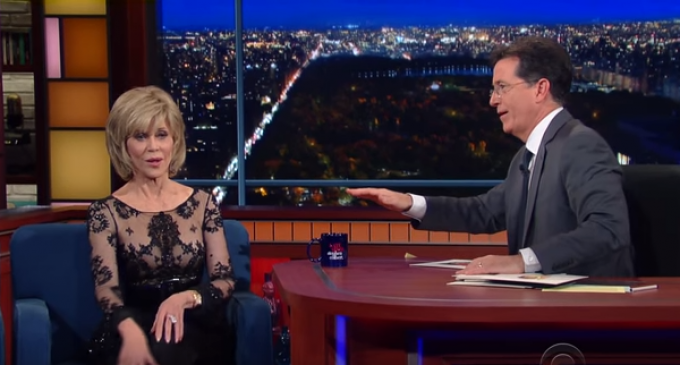 Jane Fonda, 77-years-old, joined The Late Night stage with Steven Colbert, as he discusses her iconic life.  He asserts that Jane is, like Dylan, an icon for the Baby Boomer generation.

Is Jane Fonda an icon of the Baby Boomer generation and would they embrace her as their icon?  She certainly has stirred up angst surrounding the issues to which her name is attached, but do others from her generation view her in a favorable light?

Colbert seems to view her as an icon. He asserts that she was:

Fonda certainly has lived an eventful life, with both positive and negative rolls along the way.  Colbert asks if she the “entire scope” of the experience of life for a Baby Boomer.

Is Jane Fonda “the face” of the Baby Boomer generation? Steven Colbert posits to Fonda in a Late Night interview that she is the voice of that generation.  I wonder if that is something that most Boomers would embrace or if they would rather separate themselves from her experiences.