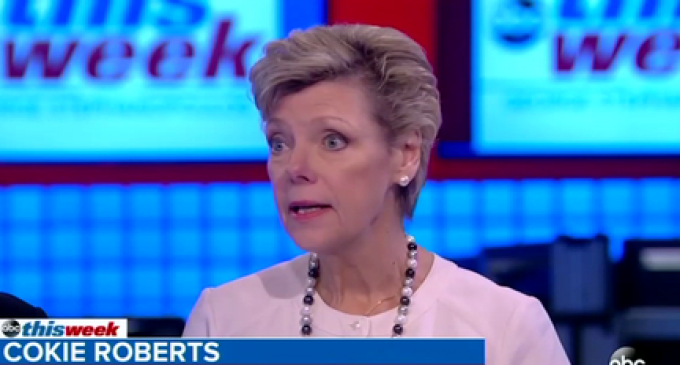 In the aftermath of the violent events in Charlottesville, Virginia on Saturday, the usual mainstream media suspects emerged to assign blame to President Donald Trump for the car plowing into a crowd of demonstrators in the university town.

In their eagerness to paint the president, those who serve with him, and those who support him as evil racists, the fake news crowd even condemned President Trump for his remarks calling for Americans to unite and for speaking out against those who commit violence on all sides.

Naturally, these are the same media types who never pressured President Barack Obama to condemn Black Lives Matter for calling for cops’ murder. Heck, he even invited their representatives to the White House for a meeting. Nor did Mr. Obama ever decry the street violence committed by Antifa thugs.

Donning her most sanctimonious robes was ABC News veteran Cokie Roberts. As a member of a prominent Louisiana family, she often appears as the expert on race in America for the network. But, she seriously crossed the line in attacking President Trump. The details are on the next page.