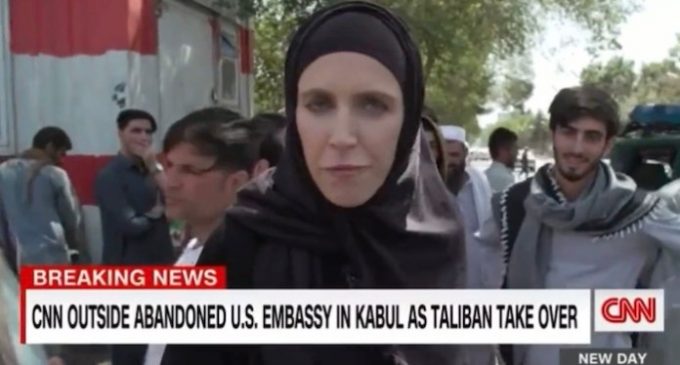 Snowflakes sure have a tough time getting beyond surface behavior. On Monday CNN's network chief international correspondent Clarissa Ward drove this fact home in a report from the streets of Kabul, Afghanistan.

Ward reported it is “clear” the Taliban is now back in “charge” of Afghanistan.

“As soon as we leave our compound, it’s clear who is now in charge,” Ward stated in a report. “Taliban fighters have flooded the capital. Smiling and victorious, they took this city of 6 million people in a matter of hours — barely firing a shot. This is a sight I honestly thought I would never see: scores of Taliban fighters, and just behind us, the U.S. embassy compound. Some carry American weapons. They tell us they’re here to maintain law and order.”

Ward then translated an interview with a commander of the Taliban who told her that “everything is under control and that America needs to “leave” Afghanistan.

“‘Everything is under control. Everything will be fine,’ the commander says. ‘Nobody should worry,'” she reported.

“‘America already spent enough time in Afghanistan,'” she quoted him as saying. “‘They need to leave,’ he tells us. ‘They already lost lots of lives and lots of money.'”

CNN showed a clip of members of the Taliban holding guns up in the air and chanting.

“They’re just chanting ‘Death to America’ but they seem friendly at the same time.”
pic.twitter.com/xiaj1GjcKJ

My dude here is having bad thoughts rn.

Yes, just because some is smiling at you and saying nice things doesn't mean they are your friend.