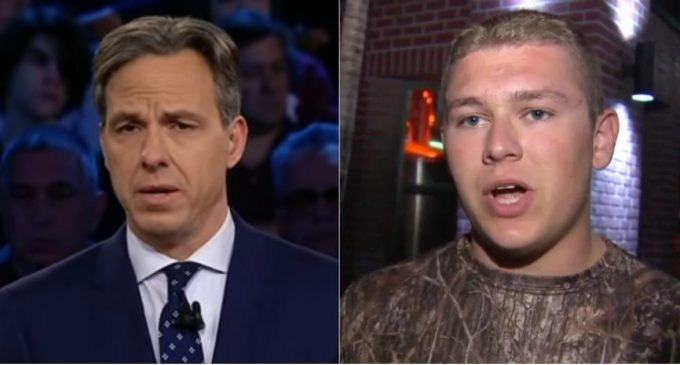 When candidate Donald Trump called CNN “Fake News,” or even “Very Fake News” he set off a firestorm. There are few things liberals can stand less than the truth. And he walked up to the leftist network, got in their face, told the truth, and dared them to do something about it. Such has never been seen before on this level.

This was met with howls of protest, but Mr. Trump is fair about it. He gave the leftist loons at MSNBC a good blast as well. Americans who are sick of advocates for leftist causes getting away with masquerading as professional, unbiased journalists had to love it.

This battle to get news reporting uncontaminated by liberal bias continues. CNN persists in its aggressive work of convincing Americans that traditional values or anything connected with the conservative cause are evil. We work to oppose and expose them.

This sickening bias seeps into most any story they broadcast. As such, CNN, MSNBC, and some others are great contrary indicators. Watch them if you can stand it, then figure the truth is the opposite of what they broadcast, and you'll hit the mark more often than many might think.

The liberals cannot help themselves. They must use every vehicle they can corrupt to get their message out. And not only that, their biased reporting insinuates itself more often than not, even in minor stories.

But give them a big story that touched on a real hot-button issue, and they go on a full-court press to indoctrinate their viewers in all things liberal.

And such a disgusting display is just what you'll see on page two. That is, with a surprising twist.

Our nation has been confronted once again with a level of evil that is almost impossible to understand. The depth of depravity or mental illness that would motivate the alleged perpetrator of the recent school massacre in Florida cannot be taken in and understood. It is simply too profound.

Yet the matter must be addressed — and on a number of levels. The family and friends of those slaughtered are in profound need of care. This is a really bad time to inject politics into this tragedy.

So that is just what CNN and MSMBC did.

Marjory Stoneman Douglas High School student Colton Haab said he was approached by CNN to ask a question at Wednesday night's town hall but decided not to after the network gave him a “scripted question,” quashing one he wrote himself. Haab, a member of the Junior ROTC shielded students while the school was under attack from the shooter, said he was going to ask about using veterans as armed security guards. (CNN response below.)

“CNN had originally asked me to write a speech and questions and it ended up being all scripted,” Haab told WPLG-TV.

Children have been massacred. Grief and unbelief naturally run rampant. Emotional wounds have been inflicted that will never completely heal. So the liberals who purport to be those who are truly compassionate decided to callously turn this into an opportunity to push the left-wing agenda. They should be ashamed — but no doubt are not.

We will not stoop to accusing these so-called journalists of being happy about this opportunity to spread their gun-control agenda. But they are certainly eager to take advantage of it. No doubt they were making their plans on how to assault the Second Amendment before the bodies were even cold.

But back to the main focus of this story. CNN's attempt to turn the town hall meeting into a carefully-scripted, sensational “show” where this tragedy is used to promote the liberal agenda has been exposed. It's a disgrace to the profession of journalism.

A young man who is a student there was originally asked to make a speech. When he found out that CNN was turning it into a scripted event designed to promote gun-control, he refused to appear. As such, we have a 17-year old young man with more integrity than the journalist-propagandists at MSNBC and CNN,

“I expected to be able to ask my questions and give my opinion on my questions,” Haab said.

“Colton Haab, a member of the Junior ROTC who shielded classmates in the midst of terror says he did not get to share his experience,” WPLG's Janine Stanwood explained.

“Colton wrote questions about school safety, suggested using veterans as armed school security guards but claims CNN wanted him to ask a scripted question instead so he decided not to go,” Stanwood reported.

“CNN had originally asked me to write a speech and questions and it ended up being all scripted,” Haab said. “I don't think that it's going get anything accomplished. It's not gonna ask the true questions that all the parents and teachers and students have.”

Perhaps President Trump's characterization of outlets such as CNN and MSNBC as “Fake News” does not go far enough.

Upon hearing of the latest in fake news from the kings of fake nePresidentdnet Trump put out this tweet:

“School shooting survivor says he quit @CNN Town Hall after refusing scripted question.” @TuckerCarlson. Just like so much of CNN, Fake News. That’s why their ratings are so bad! MSNBC may be worse.

CNN response to the claim of a "scripted question" for last night's town hall: pic.twitter.com/Mz1hMqqfkw

And in the midst of all the lies and distortions being spread by the left, that is the truth.