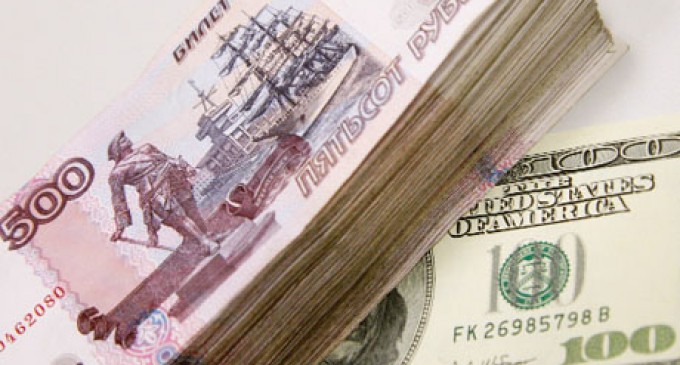 The dollar is quickly losing it's world currency status. And when this pillar is lost, there will be nothing left of our economy.

Obama's puny sanctions have done nothing but give Russia more license to circumvent the dollar.

So what are we doing about the new deals Russia is setting up to do? Threaten more sanctions, of course.

China has led the BRICS nations in the dislodging of our dollar from its global currency position, and the “sanctions war” heating up between the US and Russia have given them more impetus for their long-awaited scheme ditch the petrodollar – during the last month, China opened two centers to process yuan-denominated trade flows, one in London and one in Frankfurt.

Of course, Obama wants to destroy this nation in favor of a Marxist state, and helping Russia and China collapse our economy completely by getting rid of the petrodollar will provide him an easy excuse. When the collapse finally comes, he will blame their actions, when in reality, this was the plan of the communists in our government all along.

America can be killed off now without the shot from a single rifle.

The gradual erosion of the U.S. dollar's status as the world's reserve currency has been greatly hastened of late. This is due not only to the perpetual gridlock in D.C., but also our government's inability to articulate a strategy to deal with the $126 trillion of unfunded liabilities.

Our addictions to debt and cheap money have finally caused our major international creditors to call for an end to dollar hegemony and to push for a “de-Americanized” world.

China, the largest U.S. creditor with $1.28 trillion in Treasury bonds, recently put out a commentary through the state-run Xinhua news agency stating that, “Such alarming days when the destinies of others are in the hands of a hypocritical nation have to be terminated.”

In addition, Japan (our second largest creditor holding $1.14 trillion of U.S. debt) put out a statement through its Finance Minister last week saying, “The U.S. must avoid a situation where it cannot pay, and its triple-A ranking plunges all of a sudden.”

It is both embarrassing and hypocritical to be lectured by Japan about an intractable debt situation. However, the sad truth is we have become completely reliant on these two nations for the stability of our bond market and currency.

We arrived at this condition because our central bank has compelled the nation to rely on asset bubbles for growth and prevented the deleveraging of the economy by forcing down interest rates far below a market-based level.

For example, instead of allowing debt levels to shrink, the Fed's virtually free money has now caused consumer credit to surge past the $3 trillion mark by the second quarter 2013; that is up 22 percent in the past three years. And of course, the Federal government massively stepped up its borrowing beginning in 2008, piling on over $6.8 trillion in additional publicly traded debt since the start of the Great Recession.

While most are now celebrating the end of government gridlock (however ephemeral it may be), the truth is few understand the consequences of our addictions.

The real problems of government largess, money printing, artificial interest rates, asset bubbles and debt have not been addressed at all. Rather, Washington has merely agreed to perpetually extend its lines of credit and to have the central bank purchase most of that new debt.

Instead of placating the fears of our foreign creditors we have cemented into their minds that the U.S. dollar and bond market cannot be safe repositories of their savings. The eventual and inevitable loss of that confidence will ensure nothing less than surging prices and a complete collapse of our economy.

On the heels of Russia’s potential “holy grail” gas deal with China (2), the news of a Russia-Iran oil “barter” deal (3), it appears the US is starting to get very concerned about its almighty Petrodollar

*U.S. SAYS ANY SUCH DEAL WOULD TRIGGER SANCTIONS

*U.S. HAS CONVEYED CONCERNS TO IRANIAN GOVT THROUGH ALL CHANNELS

We suspect these sanctions would have more teeth than some travel bans, but, as we noted previously, it is just as likely to be another epic geopolitical debacle resulting from what was originally intended to be a demonstration of strength and instead is rapidly turning out into a terminal confirmation of weakness.

As we explained earlier in the week, Russia seems perfectly happy to telegraph that it is just as willing to use barter (and “heaven forbid” gold) and shortly other “regional” currencies, as it is to use the US Dollar, hardly the intended outcome of the western blocakde, which appears to have just backfired and further impacted the untouchable status of the Petrodollar. …

“If Washington can’t stop this deal, it could serve as a signal to other countries that the United States won’t risk major diplomatic disputes at the expense of the sanctions regime,”

And here is Voice of Russia, “Russia prepares to attack the Petrodollar“:

The US dollar’s position as the base currency for global energy trading gives the US a number of unfair advantages. It seems that Moscow is ready to take those advantages away. (4)

The existence of “petrodollars” is one of the pillars of America’s economic might because it creates a significant external demand for American currency, allowing the US to accumulate enormous debts without defaulting. If a Japanese buyer want to buy a barrel of Saudi oil, he has to pay in dollars even if no American oil company ever touches the said barrel. Dollar has held a dominant position in global trading for such a long time that even Gazprom’s natural gas contracts for Europe are priced and paid for in US dollars. Until recently, a significant part of EU-China trade had been priced in dollars.

Lately, China has led the BRICS efforts to dislodge the dollar from its position as the main global currency, but the “sanctions war” between Washington and Moscow gave an impetus to the long-awaited scheme to launch the petroruble and switch all Russian energy exports away from the US currency .

The main supporters of this plan are Sergey Glaziev, the economic aide of the Russian President and Igor Sechin, the CEO of Rosneft, the biggest Russian oil company and a close ally of Vladimir Putin. Both have been very vocal in their quest to replace the dollar with the Russian ruble. Now, several top Russian officials are pushing the plan forward.

First, it was the Minister of Economy, Alexei Ulyukaev who told Russia 24 news channel that the Russian energy companies must should ditch the dollar. “ They must be braver in signing contracts in rubles and the currencies of partner-countries, ” he said.

Then, on March 2, Andrei Kostin, the CEO of state-owned VTB bank, told the press that Gazprom, Rosneft and Rosoboronexport, state company specialized in weapon exports, can start trading in rubles. “ I’ve spoken to Gazprom, to Rosneft and Rosoboronexport management and they don’t mind switching their exports to rubles. They only need a mechanism to do that ”, Kostin told the attendees of the annual Russian Bank Association meeting.