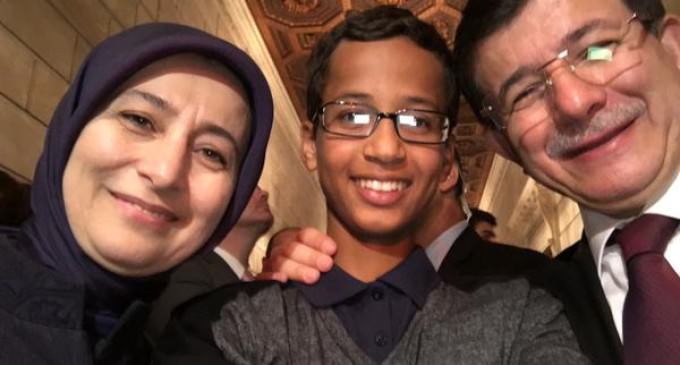 “Clock boy” Ahmed Mohamed, is on a whirlwind tour all over the Middle East.  Ahmed, and his family, made it to Mecca for umrah,  which means pilgrimage, a trip sponsored by the Saudi government.  For Ahmed, the sponsored trips, honorary audiences and plain exaggeration of this story is an example of what it looks like when the main stream media (MSM) gets out of control.  This family, the ‘Mohamed's, have been trying for years to gain the spotlight.   You will remember Ahmed,  the Texas teen who took apart a clock, put the guts of the clock in a suitcase and brought it to school, alleging he built a clock from scratch.

On the trip with Ahmed, is his uncle Moussa Al-Hassan, who is acting as the family spokesman.   Moussa Al-Hassan , is spewing islamophobic terms in reference to the experience of living in America.  Ahmed is being hailed as some sort of boy genius.   The Mohamed family headed to Qatar, where they cozied up with those associated with the Muslim Brotherhood.

After clock boy Ahmed returns from the Middle East, he will be spirited away for his visit to the White House, were he will be given the red carpet treatment by Obama.