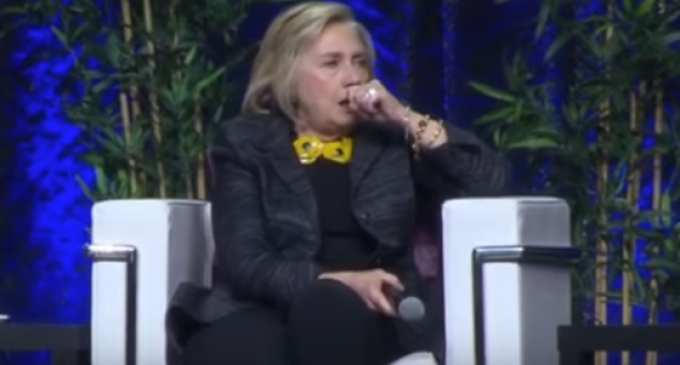 Bill and Hillary Clinton began their grand 13-city paid speaking tour in a Toronto hockey arena on Tuesday evening staring out at more than 15,000 empty seats. It's enough to make someone sick, and, it did.

The arena holds 19,800 people but the Clintons only manage to attract 3,300 — which works out to 83 percent of capacity. Even though curtains were put up in order to cut the place in half, it was easily seen that the vacant seats far outnumbered the occupied ones.

To make matters even more embarrassing, as the event neared the venue tried and failed to give tickets away at a measly $6.55 each. Ticket prices started out between $200 and $53 Canadian.

One can only imagine what must go through the minds of these two world-class criminals when they see President Trump playing to packed stadiums with a crowd of 20,000 people -many of whom waited in line for many hours to hear him speak.

Turn the page to see Hillary get all choked up over the fiasco.