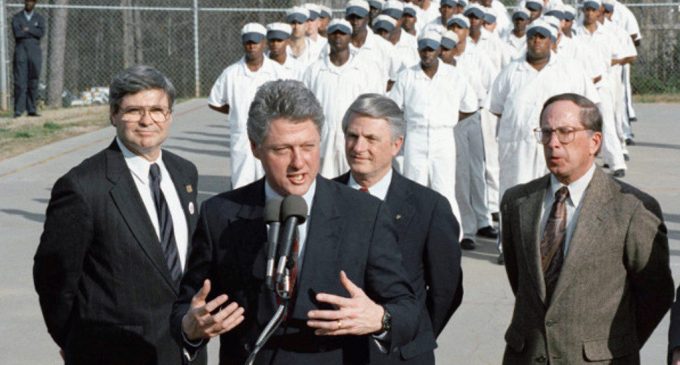 I have not given this a lot of thought until just recently.  The Thirteenth Amendment of the United States Constitution reads:

Article XIII, Section 1.  Neither slavery nor involuntary servitude, except as a punishment for crime whereof the party shall have been duly convicted, shall exist within the United States, or any place subject to their jurisdiction.

Article XIII, Section 2.  Congress shall have power to enforce this article by appropriate legislation.  Approved, February 1, 1865

What it all boils down to is this:  Having prison inmates do work outside the prison for no pay is an “authorized” form of modern-day slavery.

This has apparently been a debate for many years, for which I have been largely ignorant.  But the level of conversation regarding the 13th Amendment and the prison release program has been in the national dialogue for many years.  Not sure why it hasn't gained more national attention in years past, but it has recently jumped into the forefront of some circles in the mainstream because of the fact that someone high up in the Leftist echelon has been named in conjunction with this governmental practice who has been a sometimes outspoken advocate of the Black community.

Don't get me wrong.  I have never considered this person to be a true advocate of the Black community.  In fact, there have been blatant racist outbursts by this former candidate that have been completely hushed up by the willing accomplices in the mainstream media and which have been vile in the least and absolutely disgusting in the worst.  Even the spouse of this candidate has, on more than one occasion, been known to demonstrate racist tendencies, but again, those examples are only highlighted by an alternative news media that is not beholden in political or financial bonds.

The issue at hand is a book that was published years ago in the 1990s during the tenure of one of the most simultaneously loved and reviled presidents of modern times.  The author, Hillary Clinton, wrote a particularly disturbing passage in a now-famous book called, “It Takes A Village,” which was a treatise on the modern-day family and the Leftist belief that a mother and a father are not quite enough to raise children, but that (in essence) Big Brother government and community (the Village) should be included in every facet of the development and education of the children, without which the children will be village idiots.  And if your argument is that the Christians have the church fellowship community, you're an ignoramus who doesn't understand the important role that government and other busy-body know-it-alls in the Social Justice Warrior caste play in a successful child's upbringing.

What was the egregious passage in the book that now has people seriously looking at the sincerity of a woman who, for all intents and purposes, was married to the “first Black president?”  Read on to find out…