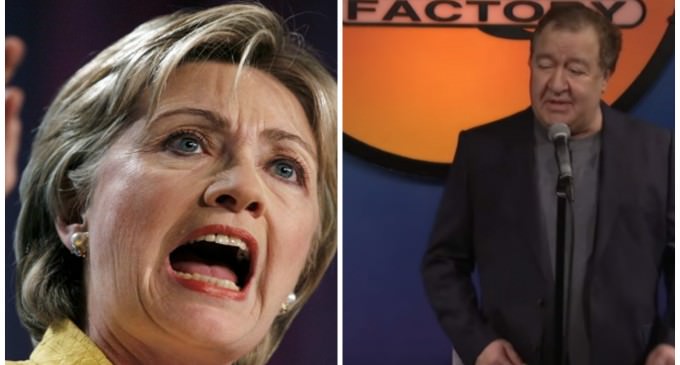 The Hillary campaign has accomplished something no other campaign ever dare do – team Hillary is demanding a “Laugh Factory” video be taken off the internet-immediately.  No other campaign, in the history of US politics has even attempted to silence a video that clearly demonstrates comedians exercising their First Amendment rights.

In fact, the video is called Hillary vs. The First Amendment.  Apparently, team Hillary learned of certain comedians out in Los Angeles' famous “Laugh Factory” who were routinely basing their acts at Hillary's expense.  Public figures are fair game, it comes with running for President that you understand your privacy, and your dignity will be encroached by others.  It's a long standing American sport, where politicians are made fun of-it's a virtual American pass time.

Team Clinton sent in some staffers to vet the routines by the comedians.  In the video, the comedians make light of the staffers, calling them “Hillary” and then breaking into some ad libs fired right at Hillary.  What the staffers presence invoked was the ire from the comedians.  It became known “Laugh Factory” owner Jamie Masada received phone calls from a “high end Hillary aide” who attempted to bully Masada on the phone.

Hillary wants the video trashed, slashed and put into the vortex whence it will never be retrieved.

“Not going to happen” says Masada.  If anything the attention the video is now gaining will do the exact opposite of what the Hillary-ites tried to squash.  Knowing Madame Secretary is adamant on eliminating the video, and is willing to threaten the Laugh Factory owner, only gives the video a high chance of going viral.

The video Hillary she does not want you to see next page: