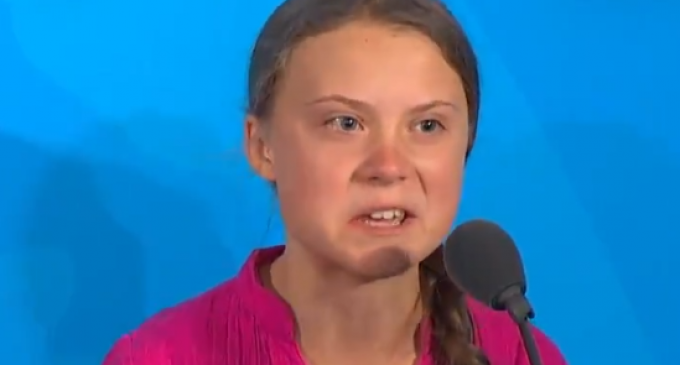 Grim-faced climate alarmist Greta Thunberg delivered harsh words to the world's leaders on Monday at the start of the U.N. Climate Action Summit. Her and 15 other teens filed a complaint with the UN, accusing five countries of violating their human rights with their inactivity on climate change.

The complaint accuses Brazil, Argentina, France, Germany, and Turkey of failing to act on the climate change threat. China, the world's greatest producer of CO2 didn't make it on the list. The five countries were accused of violating a three-decade-old human rights treaty on the Convention on the Rights of the Child.

“This is all wrong. I shouldn’t be up here. I should be back in school on the other side of the ocean yet you all come to us young people for hope. How dare you,” the Swedish teen read from her statement.

“You have stolen my dreams and my childhood with your empty words,” she added.

Cases of kids entering public discourse out of sheer discourse, such as Parkland survivors Cameron Kasky and Kyle Kashuv, are sometimes inevitable and sometimes valuable. Some political causes require spokesmen with lived experiences. But even as we saw in the aftermath of Parkland, putting children in the public spotlight is more likely to backfire on them than not.

The case of Greta Thunberg is even more egregious. Thunberg began suffering from depression as a child, by her own admission, in part because she learned about climate change at age eight. She was later diagnosed with autism and obsessive compulsive disorder and gradually became despondent as she obsessed over her fear of climate change. She developed mutism and an eating disorder so severe that she once went two months without food, and she stopped going to school. Her only sibling, a sister named Beata, also suffers from Asperger's and OCD, as well as ADHD.

Now tell me, does it seem healthy to place a child with this many mental illnesses under the spotlight of public scrutiny, with a sole focus on the very phenomenon and associated alarmism that triggered her in the first place?