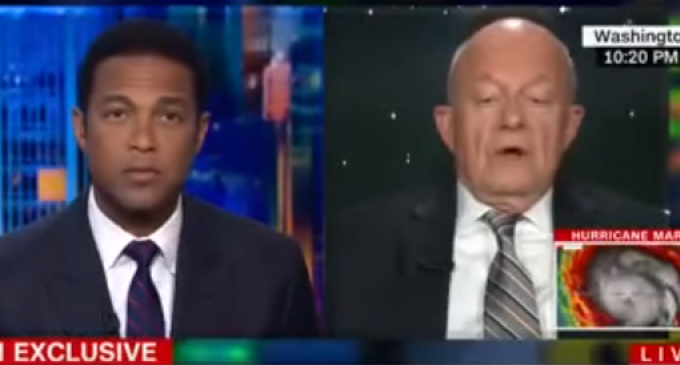 In March of this year, former National Intelligence Director James Clapper…you know…the bald guy with the hots for Barack Hussein Obama’s really sexy policies of spying on other Americans?  Well, he was talking with Meet the Press and was asked point-blank about Trump’s tweet back then referencing Obama ordering the wiretapping of he and his associates.  In fact, President Trump was adamant.  “It happened and we now have proof!” were his claims.

“Would you have been aware of such a wiretap?”  Clapper’s answer back in March was emphatic and left no doubt in the viewer’s mind.

I would certainly hope so.  I will say that the part of the national security apparatus that I oversaw — the DNI — there was no such wiretap activity mounted against the president, the president-elect at that time, or as a candidate, or against his campaign.”

He was then pressed on whether he would even KNOW if other agencies like the FBI would have requested a FISA court order for a wiretap.  “Yes,” was his one-word answer.  That’s pretty clear-cut, I’d say.  The interviewer went on, “At this point, you can’t confirm or deny whether that exists?”  The answer was quick and concise.  “I can deny it.  There is no FISA court order at Trump Tower.”

So glad we cleared that up because, well…it appears that Clapper may have been a bit hasty with his denial.  The former director is now dialing back his “emphatic” answer to a softer, kinder, gentler answer.  On the next page, you can read all about his new denial of a previous denial!