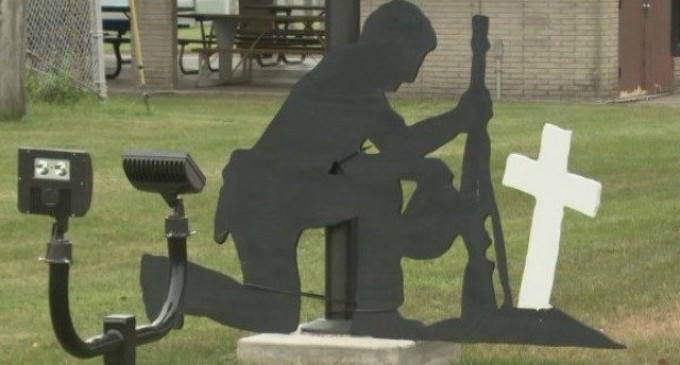 The quaint town of Knoxville, Iowa, a close knit community with traditional values, wanted to honor local veterans with a monument in Young Park.  The townspeople were raising money for a permanent statue, but had put up a temporary display, a silhouette of a kneeling soldier and a cross, at place reserved for it in the park.

One anti-Christian “squeaky wheel” complained to the Knoxville, Iowa, city council about the memorial to fallen soldiers because of the silhouette of a kneeling soldier and a cross offended him.  He enlisted the help of the anti-Christian group Americans United for Separation of Church and State, to write a letter to the city counsel stating the statue was tantamount to the city “endorsing Christianity”.

This offended the citizens of Knoxville and they warned the council that whoever voted for the removal of the memorial would be removed via a vote from office.   The council voted 3-2 to remove it.  True to their word, the townspeople voted the counsel members out of office on November 2, 2015.  Read more on page 2.