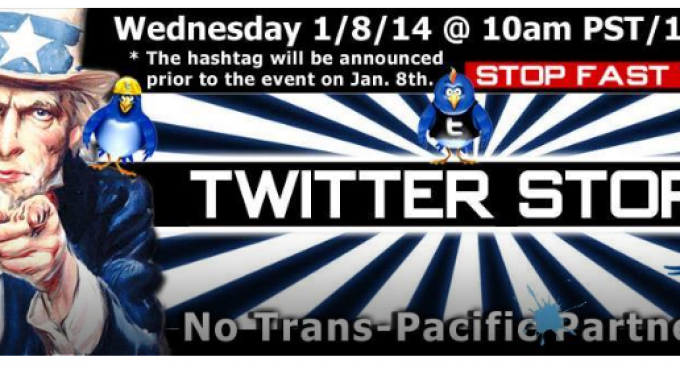 Will the citizens of the world be successful in stopping Obama’s Trans-Pacific Partnership, which is nothing more than a corporate coop of nations….with Twitter?

We will find out very shortly here.

The TPP is a globalist, corporatist agenda that will usurp US sovereignty as disputes are adjudicated not in US courts, but to an international tribunal.

And, Obama plans on cramming this down our throats via ‘fast track authority’.

However, citizens worldwide plan on creating a ‘hashtag storm’ to bring about awareness of this fascist agenda.

NEW YORK – Can ordinary citizens protesting on the Internet block the Obama administration’s plan to ram through Congress one of the most ambitious globalist, “free-trade agreements” ever negotiated?

Very quietly, opposition is building on the Internet to oppose legislation that may be introduced as soon as Jan. 8. The measure would grant President Obama what is known as “fast track authority” to ram through Congress the Trans-Pacific Partnership with limited debate and no opportunity to propose amendments. The international trade agreement, negotiated largely in secret by the Obama administration, is regarded by globalist free traders as a cornerstone of the emerging “New World Order.”

A Facebook page has been created to call for a “Anti-TPP Twitter Storm” on New Year’s Day beginning at 7 p.m. Eastern Time.

“Anti-TPP Twitter Storm Wednesday 1/1/14 @ 4 p.m. PST/7 p.m. EST, the whole world will tweet and post an ANTI-TPP hashtag (to be announced) with posts about why people should stop the Trans Pacific Partnership,” the Facebook page reads.

As WND previously reported, Obama, in his State of the Union address Feb. 12, announced a two-ocean globalist free-trade agenda:

“To boost American exports, support American jobs, and level the playing field in the growing markets of Asia, we intend to complete negotiations on a Trans-Pacific Partnership,” he said. “And tonight, I am announcing that we will launch talks on a comprehensive Transatlantic Trade and Investment Partnership with the European Union – because trade that is free and fair across the Atlantic supports millions of good-paying American jobs.”

For the first time, a decision by the U.S. Trade Representative within the Executive Office of the President was made public to expand the ongoing negotiations for a free-trade zone with Pacific Rim countries to include a a Transatlantic Trade and Investment Partnership with European Union countries.

Now there is no doubt the Obama administration has decided in the second term to double-up on a globalist agenda to develop massive new free-trade agreements across both the Atlantic and the Pacific Oceans, adding a Transatlantic Trade and Investment Partnership, or TAP, to what is being developed as the Trans-Pacific Partnership, or TPP.

WND has reported Obama administration plans in development for the past two years are ready be implemented as Democrats in Congress plan to pass the massive Trans-Pacific Partnership free-trade agreement with a simple majority vote that would skirt the two-thirds vote in the Senate that the U.S. Constitution requires to ratify a treaty.

The strategy centers on what is known as “fast track authority,” a provision under the Trade Promotion Authority that requires Congress to review a free-trade agreement, or FTA, under limited debate, in an accelerated time frame that is subject to a yes-or-no vote by Congress without any provision for Congress to modify the agreement by submitting amendments. Fast-track authority is also intended to reassure foreign partners that the FTA negotiated by the executive branch will not be altered by Congress during the legislative process.

A report released Jan. 24 by the Congressional Research Service, “The Trans-Pacific Partnership Negotiations and Issues for Congress,” makes clear the Obama administration does not have fast-track authority to negotiate the TPP, even though the office of the U.S. Trade Representative is acting as if it were in place:

The present negotiations are not being conducted under the auspices of formal trade promotion authority (TPA) – the latest TPA expired on July 1, 2007 – although the Administration informally is following the procedures of the former TPA. If TPP implementing legislation is brought to Congress, TPA may need to be considered if the legislation is not to be subject to potentially debilitating amendments or rejection. Finally, Congress may seek to weigh in on the addition of new members to the negotiations, before or after the negotiations conclude.

The CRS report states that the TPP is being negotiated as a regional free-trade agreement that U.S. negotiators describe as a “comprehensive and high-standard” FTA that they hope “will liberalize trade in nearly all goods and services and include commitments beyond those currently established in the World Trade Organization (WTO.)”

That the Obama administration is treating the TPP like a TPA and not a formal treaty obligation strongly suggests the Obama majority will seek passage of the TPP by a simple majority vote in Congress.

So, the last hurdle the Obama administration faces in making the TPP law is to get Congress to vote fast-track authority as the terms under which the TPP will be introduced to Congress.

As a consequence, one of the few remaining strategies left to opponents of the TPP is to urge Congress to vote against giving the Obama administration fast-track authority when the issue comes up for debate, possibly as early as next week.

The globalists advising the Obama administration appear to have learned from the adverse public reaction to the Security and Prosperity Partnership of North America, or SPP, during the administration of President George W. Bush. Obama has avoided the leader summit meetings that exposed to a critical alternative news media the international “working group” coordination needed to create international free-trade agreements.

Globalists have learned from the adverse reaction that such internationalist adventures as the Trans-Texas Highway, known as the NAFTA Super-Highway, will only succeed if such initiatives are pursued covertly with a determination to ridicule anyone who dares contemplate its larger purpose of increasing global sovereignty.

The Obama administration has shut down the Security and Prosperity Partnership website, SPP.gov. The last joint statement issued by the newly formed North American Leaders Summit, operating as the rebranded SPP, was issued April 2, 2012, at the conclusion of the last tri-lateral head-of-state meeting held between the U.S., Mexico and Canada in Washington, D.C.

Now, with the Trans-Pacific Partnership, the Obama administration appears to have leap-frogged SPP ambitions to create a North American Union by including Mexico and Canada in the TPP configuration.

A graph presented in the CRS report on the first page shows the reach of the agreement across the Pacific, including Peru and Chile in South America; Australia and New Zealand; Malaysia and Vietnam in Southeast Asia; Singapore; and Japan. As seen in the North American detail below, trade from Canada extends down into roughly Oklahoma in the United States, and trade from Mexico extends north roughly to Colorado. At the same time, trade from Mexico is seen both as extending up into the United States, reaching across the Pacific Ocean to the Asian and Pacific Rim nations involved in the FTA.

A leaked copy of the TPP draft makes clear in Chapter 15, “Dispute Settlement,” that the Obama administration intends to surrender U.S. sovereignty to adjudicate disputes arising under the TPP to the processes of an international tribunal.

Disputes involving interpretation and application of the TPP agreement, according to Article 15.7, will be adjudicated by an “arbitral tribunal” composed of three TPP members whose purpose under Article 15.8 will be “to make an objective assessment of the dispute before it, including an examination of the facts of the case and the applicability of and conformity with this Agreement, and make such other findings and rulings necessary for the resolution of the dispute referred to it as it thinks fits.”

Investment disputes under the TPP appear to be relegated for resolution to the International Center for Settlement of Investment Disputes, an international authority created by 158 nations that are signatories to the ICSID Convention created under the auspices of the World Bank.