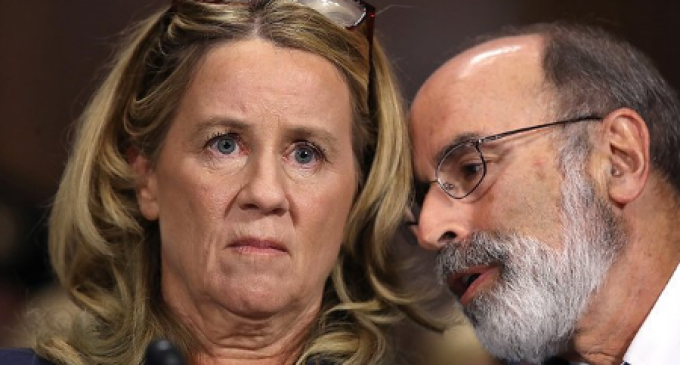 While the Left would like to paint anyone that questions Christine Blasey Ford's testimony as either a conspiracy theorist or supporter of rapists, the fact that this woman has lied in her testimony is easily demonstrated.

The top three demonstrable lies are:

Blasey Ford claimed that flying terrified her much so that she would need to be driven from Palo Alto to Washington to testify before the Senate Judicial Committee. Supposedly she could not fly under any circumstance.

But it has been revealed that Ford had lived for a year in Honolulu, a city only reachable by air, and she flew from California to the east coast to visit family on a regular basis.

2 – The claim that she is a psychologist:

The fact is that, although she has completed the course work and awarded a doctorate, she still lacks certification. Lacking the qualifications to obtain such a certificate, there is no way that she is a psychologist.

3 – The Front Door installed out of fear and trauma:

The claim of the second door served as a means to provide a sharp image as to how damaged Ford's mental state has been since the alleged attack.

“In explaining why I wanted a second front door, I began to describe the assault in detail. I recall saying that the boy who assaulted me could someday be on the U.S. Supreme Court, and spoke a bit about his background at an elitist all-boys school in Bethesda, Maryland. My husband recalls that I named my attacker as Brett Kavanaugh,” Ford said.

The door was installed but not in 2012 as claimed. The permit for remodeling her home, which included the door, was obtained in 2008. Such permits in California municipalities are generally good for six months with an option for a six-month extension. It only follows that the door was installed at that time and, in fact, photographic evidence exists showing the new door in place in 2011.

On the next page, you can check out how this woman may have used her own knowledge of self-hypnosis to, as her paper on the subject outlines, “create artificial situations” regarding the alleged attack.