Zero Hedge.com reports the news inside China and globally demonstrates how quickly the coronavirus outbreak is overwhelming the healthcare system.

“As authorities in Beijing try to convince the world that they have the outbreak under control, researchers in the US and UK have warned that the total number of cases might be closer to 4,000, according to the New York Times.

Update: officials in France have announced a third case of coronavirus has been confirmed in the country

Update (1120ET): A senator has reportedly told the press that the CDC is about to confirm a third case of coronavirus in the US. Unsurprisingly, stocks aren't taking the news too well.

That Senator has been revealed to be none other than Connecticut's Dick Blumenthal, a lawmaker with such a reputation for vanity, that it's hardly a surprise that he would murder stocks for his own political gain.

Following the briefing from health officials, Bloomy said the US needs “better relations with the Chinese” to help deal with the epidemic, a indirect slight at Trump.

And dozens more cases are still being investigated.

As the response to the virus overwhelms hospitals in Wuhan, the central military command of the PLA, China's army, has ordered medical personnel based in the city of Wuhan to travel to the city's hospitals and aid doctors and nurses struggling to keep up with the influx of cases.

The order comes as experts estimate that some 4,000 individuals may have already been infected across the country.

According to the SCMP, 40 medical officers from the city’s military hospital have already started working in the intensive care unit of Wuhan Pulmonary Hospital. The 40 officers are reported to be an advance party and the General Hospital of the People’s Liberation Army in Beijing will send more in the coming days.

Staff at the PLA hospital swore an oath earlier this week promising to do everything they can to combat the virus.

A medical practitioner who worked at the PLA General Hospital said that the hospital would send staff from its infectious disease centre to help run the new hospital and quarantine centre in Wuhan once it was ready.

215 people are talking about this

Staff there held an oath-taking ceremony on Wednesday pledging they would do their utmost to win the battle against the new coronavirus.

“We all swore that we will follow the order, make sacrifices if necessary and do our jobs as required and would not be afraid to suffer or even to die,” he said. “[We were told that] we triumphed over Sars and we will win again this time.”

As we noted below, Wuhan is scrambling to build a makeshift hospital from scratch on the outskirts of the city as a quarantine and treatment center for coronavirus patients. Beijing's ability to quickly expand capacity to treat infected individuals was said to be instrumental in the fight against SARS 17 years ago.

Asian markets closed on Friday for the Lunar New Year holiday, which officially begins on Saturday. But in China, the Communist Party leadership are scrambling to contain the virus as 13 cities in Hubei Province are now under quarantine, meaning more than 40 million Chinese will be forced to spend the holiday week at home, the South China Morning Post reports.

Health authorities reported 66 more suspected cases overnightas a result of broader criteria for people showing symptoms, bringing the total number of suspected cases to 236 as of Friday morning in Hong Kong. Among those cases, more than 100 are now in isolation. Across China, Hong Kong and Macau, authorities have closed schools and suspended the start of the new semester. Even Disneyland Shanghai has announced plans to close for the holiday. 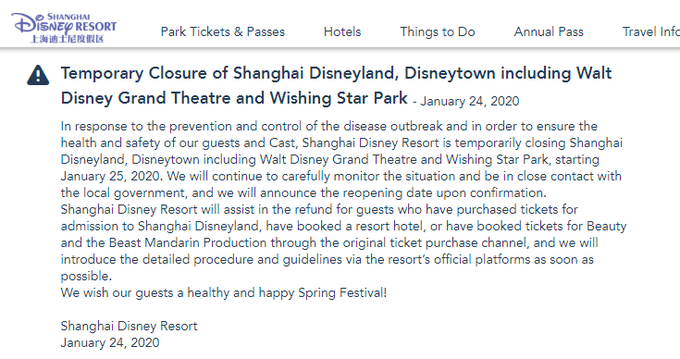 102 people are talking about this

As authorities in Beijing try to convince the world that they have the outbreak under control, researchers in the US and UK have warned that the total number of cases might be closer to 4,000, according to the New York Times.

South Korea and Japan have each confirmed their second cases, while the US worries that a second case may have been discovered in Texas. Reports that an individual is under quarantine in Sydney have also emerged, while fears about a virus case in New Jersey have already been debunked.

Update (1700ET): All day we've been watching disturbing videos of hospital hallways littered with what appear to be dead bodies, yet the death toll from the Wuhan coronavirus hasn't budged from 26 since Beijing reported the first two deaths outside Hubei yesterday.

Now we know why: As we suspected, the virus has been claiming more victims. But the local authorities, who promised ‘transparency' in everything virus-related, apparently felt the need to wait until 4 am local time to drop this massive bomb: Another 15 people have died in Hubei as hospitals struggle with severe shortages of nearly everything, including doctors and nurses. That brings the total number of casualties to 41. In addition, another 180 cases have been discovered in Hubei, bringing the total number of cases over 1,000.

S&P Global Ratings has issued a statement claiming that, if the situation worsens, the outbreak could knock 1.2 percentage points off China's GDP. Yet, as the number of cases explodes despite the travel ban, the World Health Organization is insistent that the situation hasn't risen to the level of a global pandemic – at least not yet. Back in Wuhan, the center of the outbreak, conditions are deteriorating rapidly. Video purportedly showing the hospital at the center of the outbreak paints a picture of widespread misery as health care workers collapse on their feet, infection rates explode even among those responsible for treating patients. Local media has also reported that there aren't enough testing kits and medical workers available to diagnose new cases.

There have even been reports of patients showing concerning symptoms being turned away from hospitals. Nice to see that their good ol' socialized health care system is clearly so well-prepared for such an outbreak. Desperate for money and supplies, hospitals in Wuhan have resorted to begging the government and the public for help.

In the meantime, reports claim that China's censors are removing all frightening videos from domestic social media outlets. There have been reports of people in Shanghai and in Wuhan being herded into makeshift quarantine camps erected near hospitals around the country. In some places, authorities are scrambling to build whole new hospital wings as fast as they can.”