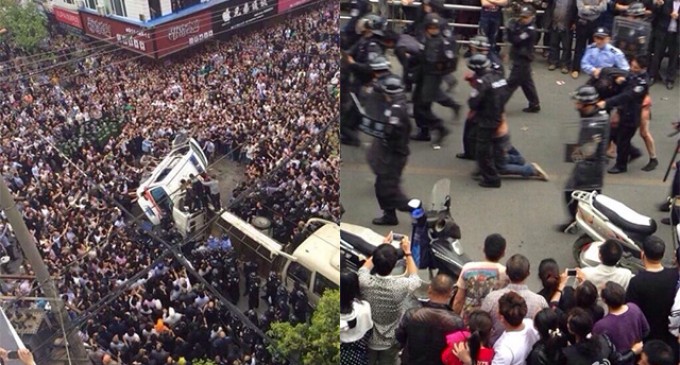 1000 infuriated Chinese citizens beat five government bureaucrats on Saturday after members of the Chengguan municipal police beat a man to death with a hammer after he attempted to film them beating a female street vendor.

“Angry onlookers deflated the van’s tires, while others smashed windows and doors with bricks, rocks, and wooden sticks. The men were dragged out of the van and beaten senseless by the mob,” reported the Epoch Times.

Yet another sign of the increasing social tensions in Communist China.

The disturbance began after members of the Chengguan municipal police, China’s widely loathed bureaucrats who enforce government regulations against street vendors, began harassing and beating a woman in the Cangnan County of Wenzhou City, Zhejiang Province.

When a bystander, 36 year-old Mr. Huang, came to the woman’s aid by filming the confrontation, he was reportedly attacked by cops with a hammer and began to vomit blood before dying on the way to hospital.

After word spread on social media about what had just happened, a huge mob of citizens arrived to surround the Chengguan officers, who attempted to hide in their van. “Kill them, kill them!” chanted the mob as the officers were savagely beaten with bats, bricks and stones, leaving them bloodied and unconscious.

“Angry onlookers deflated the van’s tires, while others smashed windows and doors with bricks, rocks, and wooden sticks. The men were dragged out of the van and beaten senseless by the mob,” reports Epoch Times.

When an ambulance arrived to provide medical treatment, the mob tipped over the vehicle. Some reports state the the five cops were killed, but state media later claimed, “Two of the injured remained in a critical condition while a further three who suffered minor wounds received treatment.”

The GIF image below shows the mob flipping over the ambulance.

100 riot police were subsequently dispatched to deal with the crowd and ten people were arrested.

“The mass disturbance was the latest in a long line of violence incidents between the members of the public and the urban management force, or chengguan, whose main duties are dealing with illegal street vendors. The bureaucrats’ image has been marred by repeated media reports of their use of excessive force while carrying out their duties, sometimes resulting in injuries and even death,” reports the South China Morning Post.

The same unit was involved in an incident last year in the town of Linwu when they confronted a husband and wife for selling a watermelon the couple had grown on their farm. A scuffle broke out which resulted in Deng Zhengjie and his wife being severely beaten, with Zhengjie subsequently dying as a result of his injuries.

Although state media habitually attempts to censor such incidents, mass disturbances, riots and attacks on police have become more prevalent throughout China in recent years, with tensions fueled by rampant government corruption, forced relocation of homeowners, and the huge gulf between rich and poor.

The images below of the incident on Saturday were uploaded by users of Weibo, China’s version of Twitter.