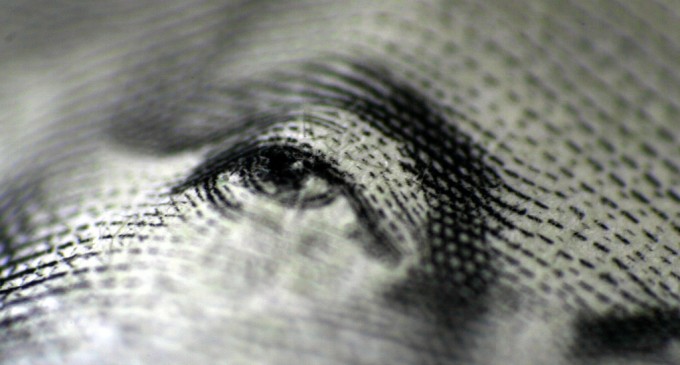 Better keep your eye on how China treats our dollar – if there is one thing that could bring our debt-fueled economy down quickly it's what China does with our debt.

We are completely dependent on the world using US dollars, without the dollar being the world reserve currency, we would sink like a rock.

We just learned last week that in December, China dumped $50 billion in US debt.

This is on top of these facts:

– China has announced that it's “no longer in China’s favor to accumulate foreign-exchange reserves”. This means they will stop buying our debt.
– China has signed numerous international currency agreements with other nations during the past couple of years. So U.S. dollars being used less in international trade.
– China has been buying gold like crazy. When currencies collapse, new currencies back by gold arise.
– One day interest rates are going to rise dramatically – the market will eventually dictate true interest rates when confidence is lost. If interest on U.S. government debt rises to just 6 percent, we will be paying out more than a trillion dollars a year just in interest on the national debt. That also spells death to our economy.

It's obvious China is moving away from the dollar slowly and quietly, all the while preparing for a non-dollar dominated world.

In order for our current level of debt-fueled prosperity to continue, the rest of the world must continue to use our dollars to trade with one another and must continue to buy our debt at ridiculously low interest rates

Of course the number one foreign nation that we depend on to participate in our system is China.  China accounts for more global trade than anyone else on the planet(including the United States), and most of that trade is conducted in U.S. dollars.  This keeps demand for our dollars very high, and it ensures that we can import massive quantities of goods from overseas at very low cost.  As a major exporting nation, China ends up with gigantic piles of our dollars.  They lend many of those dollars back to us at ridiculously low interest rates.  At this point, China owns more of our national debt than any other country does.  But if China was to decide to quit playing our game and started moving away from U.S. dollars and U.S. debt, our economic prosperity could disappear very rapidly.  Demand for the U.S. dollar would fall and prices would go up.  And interest rates on our debt and everything else in our financial system would go up to crippling levels.  So it is absolutely critical to our financial future that China continues to play our game.

Unfortunately, there are signs that China has now decided to start looking for a smooth exit from the game.  In November, I wrote about how the central bank of China has announced that it is “no longer in China’s favor to accumulate foreign-exchange reserves”.  That means that the pile of U.S. dollars that China is sitting on is not going to get any higher.

In addition, China has signed a whole host of international currency agreements with other nations during the past couple of years which are going to result in less U.S. dollars being used in international trade.  You can read about many of these agreements in this article.

This week, we learned that China started to dump U.S. debt during the month of December.  Many have imagined that China would try to dump a flood of our debt on to the market all of a sudden once they decided to exit, but that simply does not make sense.  Instead, it makes sense for China to dump a bit of debt at a time so that the market will not panic and so that they can get close to full value for the paper that they are holding.

As Bloomberg reported the other day, China dumped nearly 50 billion dollars of U.S. debt during the month of December…

China, the largest foreign U.S. creditor, reduced holdings of U.S. Treasury debt in December by the most in two years as the Federal Reserve announced plans to slow asset purchases.

The nation pared its position in U.S. government bonds by $47.8 billion, or 3.6 percent, to $1.27 trillion, the largest decline since December 2011, according to U.S. Treasury Department data released yesterday.

It is going to stockpile gold of course.  In fact, China has been voraciously stockpiling gold for quite some time, and their hunger for gold appears to be growing.

According to Bloomberg, more than 80 percent of the gold that was exported from Switzerland last month went to Asia…

Switzerland sent more than 80 percent of its gold and silver bullion and coin exports to Asia last month, the Swiss Federal Customs Administration said today in an e-mailed report. It imported most from the U.K.

Hong Kong was the top destination at 44 percent on a value basis, with India at 14 percent, the Bern-based customs agency said in its first breakdown of the gold trade data since 1980. Singapore accounted for 8.6 percent of exports, the United Arab Emirates 7.9 percent and China 6.3 percent.

When China imports gold, most of it goes through Hong Kong.  We know that imports of gold from Hong Kong into China are at an all-time record high, but we don’t know exactly how much gold China has accumulated at this point because they quit reporting that to the rest of the world a number of years ago.

When it comes to global finance, China is playing chess and the United States is playing checkers.  China knows that gold is a universal currency that will hold value over the long-term.  As the paper currencies of the world race toward collapse, China could end up holding most of the real money and that would be a huge game changer when they finally reveal that fact…

The announcement of China’s new gold hoard will send shockwaves through the financial markets, and make China and the Chinese yuan (their national currency) even bigger players at the international table.

As China (and eventually the rest of the world) moves away from a U.S.-based financial system, the consequences are going to be dramatic.

For instance, right now the average rate of interest that the U.S. government pays on debt is just 2.477 percent.  That is ridiculously low and it is way below the real rate of inflation.  It is simply not rational for anyone to lend the U.S. government money so cheaply, and at some point we are going to see a dramatic shift.

When that day arrives, interest rates are going to rise dramatically.  And if the average rate of interest on U.S. government debt rises to just 6 percent (and it has been much higher than that in the past), we will be paying out more than a trillion dollars a year just in interest on the national debt.

Even more frightening is what a rapidly changing interest rate environment would mean for our banking system.  There are four large U.S. banks that each have exposure to derivatives in excess of 40trillion dollars.  You can find the identity of those banks right here.  Interest rate derivatives make up the biggest chunk of those derivatives contracts.  As John Embry told King World News just the other day, when that bubble bursts the carnage is going to be unprecedented…

“Stockman brought up a brilliant point, the fact that we have hundreds of trillions of dollars of interest rate swaps, which are polluting the world’s banking system. If we see growing volatility in interest rates, and I think that’s inevitable with what’s going on, that would cause spasms in the financial system. And if something goes wrong in the derivatives market, Heaven help us because the leverage that is imparted to the banking system through these derivatives is unholy.”

Unfortunately, very few of the “experts” will ever see this crash coming.

And very few of them will see it coming this time.