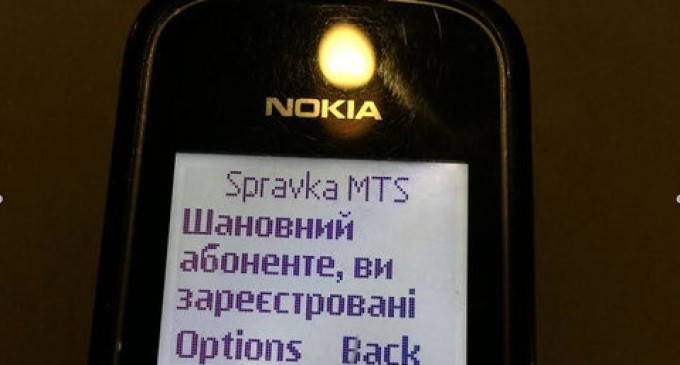 This is quite chilling. Take a look at this text recently sent to protesters in Kiev, Ukraine:

How long before we see this in the US?

The message echoed language in a new law making it a crime to participate in protests deemed violent.

As my colleague Andrew Kramer reported, protesters and journalists standing in the vicinity of fighting between the riot police and demonstrators in Kiev on Tuesday received an ominous text message on their phones: “Dear subscriber, you are registered as a participant in a mass disturbance.”

While it was unsigned, and local phone companies denied sending it, the text message — which echoed language in a new law making it a crime to participate in protests deemed violent — was widely read as a warning from the government.

Although it is unclear exactly what impact the message had on the stalwart protesters standing in the cold, the we-are-watching-you subtext provoked shivers far beyond Ukraine as news of it spread online. The text was quoted again and again on social networks by users outside Ukraine who called it “creepy” and “Orwellian.”

But it seems worth asking if this and other targeted text messages sent out Tuesday were really that unusual. Yes and no, said Eva Galperin, a global policy analyst at the Electronic Frontier Foundation. “This is not the first message that the government has sent out massively over text,” she said in an interview. But if the senders did manage to limit it to individuals standing within a few blocks at the very moment violence intensified, she said, “This would be the most targeted messaging I’ve ever encountered.”

It is actually quite easy, from a technological standpoint, to pull off this sort of feat — particularly if the phone provider is involved. At the most basic level, when a cellphone is turned on and starts looking for a signal from a relay tower, it is announcing its location to the provider that controls the nearest tower. It is not difficult for that provider to then put together a list of cellphones in that area at a given time.

This appears to have been the strategy used in Egypt during the final days of Hosni Mubarak’s presidency in 2011, when Vodafone Egypt customers suddenly received a message appealing to the “honest and loyal men to confront the traitors and criminals and protect our people and honor.” The same technique is sometimes used to send out targeted warnings about natural disasters.

In the case of “Dear Subscriber” and other mass targeted texts sent out Tuesday, however, the cellphone companies are currently denying involvement. As Mr. Kramer reported from Kiev, one provider, Kyivstar, blamed hackers using “so-called pirate base stations.”

A second text message sent to protesters and journalists on Tuesday read: “Thank you special forces of Ukraine for saving the capital – Citizens of Kiev.”

“This requires more cloak-and-dagger tactics, but it’s still doable,” said Larry Pesce, a security analyst who created the site I Can Stalk You and has spent the past few years researching the unintentional ways people share their location information. It would not be hard for a government agency or hacker group to set up a rogue phone tower to take the place of the official tower. “There is very little way for a consumer to know which cellphone tower they’ve connected to and whether it’s legitimate,” Mr. Pesce said in an interview on Tuesday.

Geolocation technology has evolved to such a degree that it is possible, once all this data is collected to identify not only latitude and longitude, but also altitude. “You can tell the difference between someone at street level moving a bus versus Grandma on the 21st floor of an apartment building,” Mr. Pesce said.