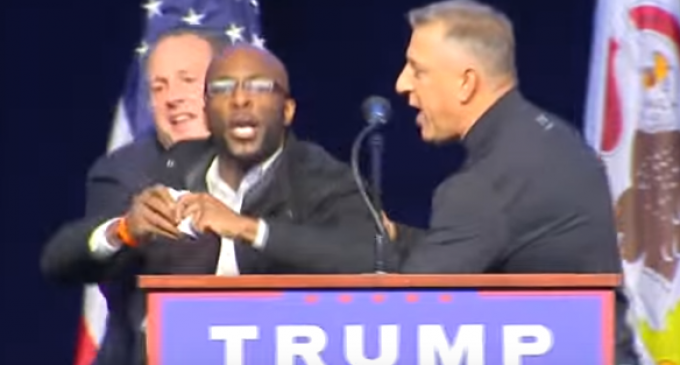 This week, Donald Trump had to cancel a campaign planned in Chicago moments before it began due to threats of violence from a mob formed outside of the venue. In any other world, the unruly, violent mob would be universally condemned. This is Trump's world, though, and somehow he's being blamed for the violence threatened against him and his supporters.

This should come as no surprise coming from the country's liberal media and their mindless consumers. For them, free speech is no longer a cherished right, but a burdensome nuisance that allows people to do such awful things as express themselves and present opposing viewpoints. No, no. There can't be any of that in the party of safe spaces and political correctness.

In fact, the suppression of free speech has basically been cheered and encouraged for years from the country's leftist politicians, and this week's events are the proof.

It is those very politicians and their pals in the news business that have accused Trump of purposefully perpetuating violence with his so-called violent rhetoric and racist commentary. The problem is, the racist, fascist Trump narrative is a creation of the liberal media, not the candidate himself. It's the media that suggests that Trump wants to “Make America White Again,” it's CNN that's saying on-air that Trump will bring back internment camps and suspend habeas corpus, and even Glenn Beck is suggesting that Trump is the next Hitler.

That is the rhetoric that's to blame for the Trump-focused violence that's being cheered this week by the media. It is not a problem of Trump's creation. This is a creation of a biased, sensationalist media out for blood.

And now that their words have stuck a chord with the more mindless, fact-free political activists of the world, they're rooting for their cause. They're not only gleeful that Trump's right to speech and assembly has been taken from him, but they've got the audacity to ask Trump to apologize for his detractors' actions.

Of course, they're not going to let Trump get away with this without dragging the other GOP candidates through the mud, and now they are being asked to condemn Trump's rhetoric as well.

See how they responded on the next page: