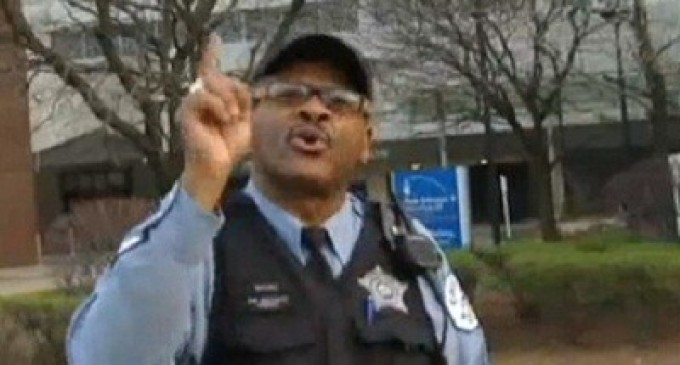 Two reporters from WGN were arrested when trying to cover the fatal shooting of a six-year-old girl after refusing to move further back as ordered by an officer.

Sounds like he’s regurgitating a belief sweeping our police force, which is becoming increasingly ‘anti-citizen’, that they can just do what they feel while us ordinary citizens have little rights to defend ourselves.

On Saturday, a Chicago policeman told local journalists their First Amendment rights could be terminated.

Ponce and Williams, who were part of a media contingent covering the fatal shooting of a six-year-old girl, were handcuffed by an officer after they refused to move farther away from the hospital (video above). “You first amendment rights can be terminated if you create a scene,” the officer told them. “Your first amendment rights have limitations.”

According to a report at NBC Chicago, the two men were already at a median halfway across the street from the hospital when a policeman ordered them to go even further.

Our members were attempting to protect and respect both the grieving family members of the child, and the memory of the child herself during a very stressful time for all parties involved.

As always, we will carefully review the allegations in the event further action is warranted.

“What upset me about last night was this was not an active crime scene,” Ponce told radio station WLS on Sunday. “This is in front of a hospital. The reporters and photographers were standing on the median sidewalk when the officer started yelling at us, telling us to get further away. We decided to take a stand.”

The Blaze’s Erica Ritz asked: “Though it is very possible that the journalists attempted to enter the hospital— their video appears to be edited— does that warrant the police officer’s graphic response, and his threat to “terminate” the first amendment rights of the journalists?”

The First Amendment to the Constitution reads:

Congress shall make no law respecting an establishment of religion, or prohibiting the free exercise thereof; or abridging the freedom of speech, or of the press; or the right of the people peaceably to assemble, and to petition the government for a redress of grievances.