In yet another installment of “The Twilight Zone: America 2013”, Chase bank is now stopping international wire transfers and limiting cash transactions to $50,000 per month!

So if you're a small business that goes over $50,000 per month in transactions you've got a big problem.

This is the beginning of the capital controls we’ve been warning about for years.

Throughout history, when governments are on the brink of financial default, they begin limiting capital controls in exactly the way we are seeing here.

Finally, the last act of desperation by governments facing financial default is to seize private funds from banks, Cyprus-style.

The precedent for this has already been set in Cyprus, and when that happened, I was among many who openly predicted it would spread to the United States. This is happening, folks!

The capital controls begin on November 17th. The bank runs may follow soon thereafter. Chase Bank is now admitting that you cannot use your own money that you’ve deposited there. This is clearly stemming from a government policy that is requiring banks to prevent cash from leaving the United States. Such policies are only put into place when a huge financial default event is expected. 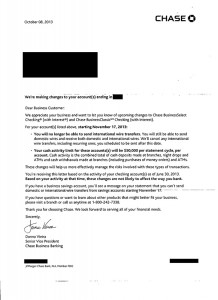