The Gateway Pundit aptly calls the pandemonium that is the US withdrawal from Afghanistan ‘Joe Biden's Saigon.'  Biden having to ‘reinvade' the country with 7000 troops in order to completely withdraw from it.

update(1058ET): The death toll rose later in the day to at least seven, including reports of two armed men shot by US troops:

Also according to the AP, “The head of US Central Command met face-to-face with senior Taliban leaders to urge their fighters not to interfere with the U.S. military’s evacuation operations at the airport in Kabul, a defense official says.”

Evacuation chaos continues as more and more US troops arrive at Kabul's international airport to “restore order” – or at least get remaining Americans out.

Meanwhile, at the now abandoned and shuttered US Embassy CNN is on the ground mingling with the Taliban, apparently…

On Monday, the press reported shocking scenes of thousands of “utterly desperate” Afghan civilians fleeing their homes and mobbing the Kabul international airport tarmac in the wake of the rapid Taliban takeover of Kabul.

According to WSJ and other English-language media outlets, at least three people have died Monday during the frenzied struggle to leave. A group of 60 nations has asked the Taliban to allow any refugees who desire to leave the country to do so without inflicting harm on them or their families.

American troops are now attempting to secure and provide order at Karzai International Airport as military airlifts of American personnel continue. Shots have been fired as American troops arrive to find the security situation spiraling out of control, potentially making safe airport operations – including flights in and out – next to impossible if it's not brought under order.

Thousands of Afghans who haven't received permission to emigrate are fleeing to the airport anyway, believing it may be their only chance for survival amid rumors that flights are now taking whoever can force their way aboard. As desperate Afghans rushed packed passenger planes, some soldiers fired warning shots as hundreds of Afghans who breached the perimeter and then rushed to board an idling C-17 transport aircraft, a Western military official said. At certain points, American troops fired lethal rounds into the air to try and force the crowds to disperse. Military personnel were forced to try and clear the runways with low-flying helicopters, from which they tossed smoke grenades and fired live ammo. The city fell to the Taliban on Sunday, after fighters massed outside the city, eventually the Taliban leadership took over the presidential palace.

“U.S. forces fired in the air at Kabul's airport on Monday to prevent hundreds of civilians running onto the tarmac, a U.S. official said,” according to Reuters.

“The firing was done to defuse the chaos,” the official added. Hundreds of Afghans reportedly rushed at idling C-17 US transport aircraft, resulting in US troops firing repeatedly into the air.

Rumors spread claiming the airline was allowing people to board even without a ticket.

Per WSJ, the chaotic rush of people desperate to get out hindered evacuation efforts: “Hundreds of Afghan civilians were seen close to the runway and around parked planes Monday morning, with some hanging from boarding ramps as they scrambled to get into the aircraft, hindering evacuation efforts,” the report describes. 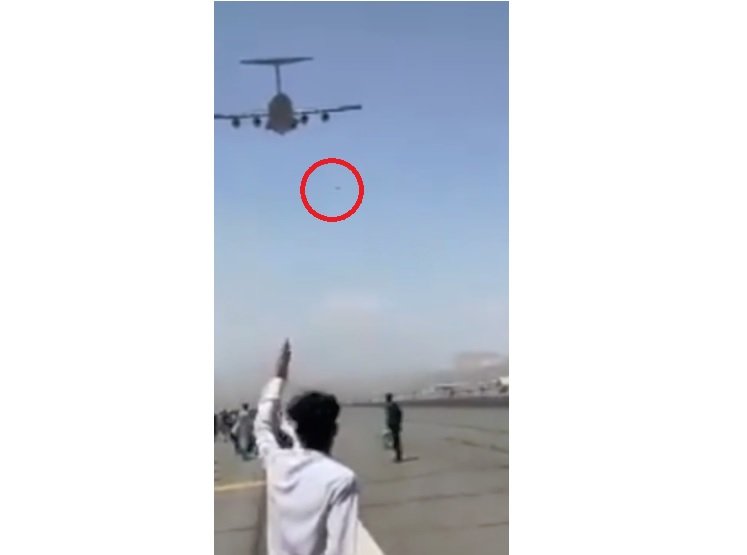 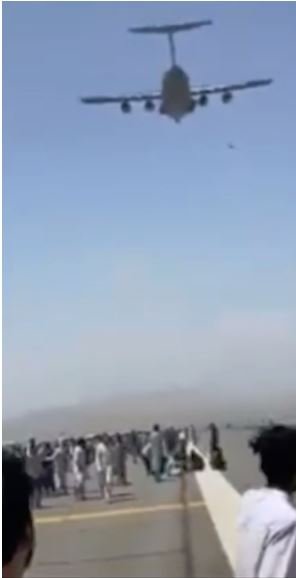 Insane. Don’t have any other words.

The moment when several people in Afghanistan fell from the plane because the were stuck to the tire of the plane.We did not deserve this misfortune.O Allah have mercy on us poor people.#Afghanistan #Afganistan #AfghanWomen #USA #america #Kabul #kabulairport #taliban pic.twitter.com/fs3n32M2a5

They are literally ON a plane pic.twitter.com/jwOrPrfhfv

This is, perhaps, one of the saddest images I've seen from #Afghanistan. A people who are desperate and abandoned. No aid agencies, no UN, no government. Nothing. pic.twitter.com/LCeDEOR3lR