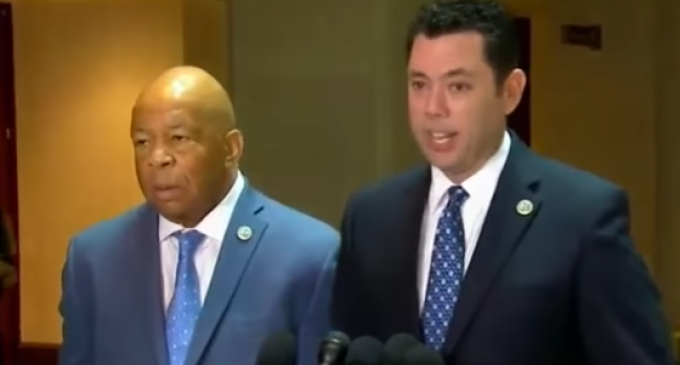 There might be a very good reason why Rep. Jason Chaffetz (R-UT) announced earlier this week that he would not be running for reelection, but possibly seeking a governor's job in the near future.

With all of the talk these days regarding the Russians and their so-called intrusion on American democracy, it stands to reason that a Republican who has been quite ineffectual in registering any semblance of victory regarding Democrat scandals, has suddenly become quite the pal of Rep. Elijah Cummings (D-MD).

Cummings, if you remember, has been at the center of nearly every single Democrat scandal since the Bill Clinton days.  Either he's part of the scandal itself, or he's merely providing cover for those directly involved.  Apparently, Chaffetz has found a new Poker buddy in the gargantuan House of Cards that is the U.S. Capitol.

The Republican representative has decided to side with the Democrats in accusing General Flynn of taking money from the Russians!  Yes, we're now officially in the Twilight Zone where alternate realities begin to play out in some bizarre Party-swapping universe.

No longer is anyone on the Right safe when it comes to the Leftist-appeasement that's taking place through RINO-Trump Resistance.  It's quite apparent that John McCain and Lindsay Graham don't like Trump, but for a time, there was a wisp of hope that Jason Chaffetz  would possibly lay down his Liberal enabler tendencies and walk the narrow path of Righteousness.

Sadly, it appears that Americans were wrong in trusting this representative to do the right thing.  Now, he appears to be suddenly on the warpath in regards to an embattled General Flynn.

What was Flynn's terrible and egregious sin committed against the United States?  According to Chaffetz and his new BFF, Cummings, the general failed to ask permission to accept a payment from Russia Today International news channel for an interview, for which he traveled to said country!

His punishment?  Flynn is apparently in some deep trouble with Congress for not asking, “Mother, May I?”

It gets even more ridiculous when one considers the amount of gall it must take to give a woman like Hillary Clinton a free pass on Benghazi, as well as her multitude of transgressions dealing with an illegally set-up email server (for which any one of us would be serving a lengthy prison sentence), and yet, these lawmakers are ready to crucify a general for taking a work-related paycheck!

Representatives Cummings and Chaffetz have their own skeletons now poking out of the proverbial closet as they ready themselves for the witchhunt!

Turn to the next page for their scandals: