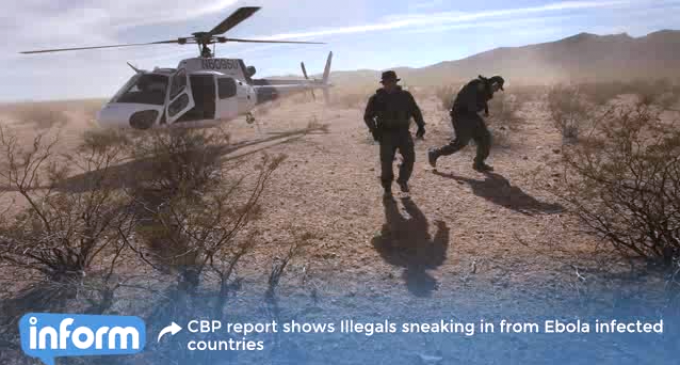 Customs And Border Protections (CBP) recently stated that Ebola could potentially come through our unsecured border with Mexico.

This is certainly a possibility as a leaked intelligence analysis from CBP shows that illegals from at least 75 different countries are pouring in through ‘Obama’s open door’ – at least 3 of those countries are stricken with Ebola.

Aside from this, a 2nd Ebola victim has just been flown directly into the US for treatment.

But even with the grave potential of this deadly disease coming in through our border, Obama has still not done anything to stop the illegals from pouring in. Of course we don’t expect him too as it’s already widely known that he planned for, or at least  knew of this event at 2 years ago, as reported by Judge Jeannie Pirro.

Instead of protecting us from this potential pandemic by closing the border, Obama has chosen to revise George Bush’s Executive Order 13295, which gives him the power to detain anyone with a mere ‘repository illness’.

The World Health Organization just announced today that the Ebola virus is an ‘extraordinary event’ and that ‘the possible consequences of further international spread are particularly serious in view of the virulence of the virus’.

So we all know people from infected countries are coming in through our border just as the WHO deems the disease a serious event, but  instead of addressing the threat, we fly victims directly into our country and Obama gives himself permission to declare martial law upon the outbreak of any minor respiratory illness.

Does it really take a genius to see what is happening here?

More on Ebola and Our Border:

Ebola could break into the United States through the unsecured U.S. border with Mexico, experts say.

“While we’ve seen no signs that Ebola virus has spread to our borders, it is very concerning,” Rep. Randy Weber (R-TX) told Breitbart News. “The border has still not been secured, and the President continues to wave the sign that our borders are open. There is no telling what might eventually make its way into the heartland, which should be concerning to all.”

Weber is a member of the House Foreign Affairs Committee’s subcommittee on Africa, Global Health, Global Human Rights and International Organizations. That panel held a special hearing Thursday to examine the potential threat to the U.S. the African Ebola outbreak presents. During the hearing, Centers for Disease Control and Prevention (CDC) director Tom Frieden downplayed the possibility Ebola could break into the U.S. via the Mexican border but did say that it is “inevitable” the U.S. would see some cases of the deadly virus though there wouldn’t be a massive outbreak.

“It is certainly possible that we could have ill people in the US who develop Ebola after having been exposed elsewhere,” Frieden testified. “But we are confident that there will not be a large Ebola outbreak in the US.”

However, a senate aide told Breitbart News Friday that Congress is monitoring the border for a potential Ebola outbreak. “Committee staff are in regular contact with CDC, [Customs and Border Protection], and other agencies to monitor the Ebola virus outbreak in Western Africa,” the Senate aide said. “Our porous southern border remains a major concern.”

Dr. Jane Orient, the executive director of the Association of American Physicians and Surgeons, said Americans should be concerned about this. 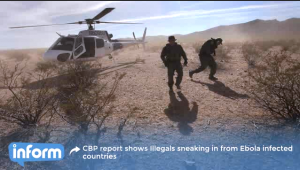