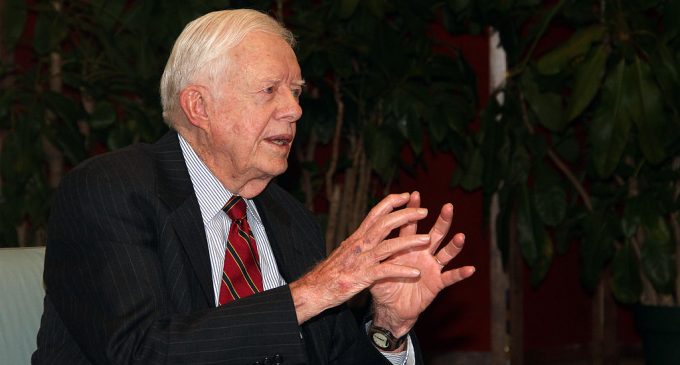 During an appearance at the Carter Center, former president Jimmy Carter claimed that the Trump administration is torturing and kidnapping migrant children housed at U.S.-Mexico border facilities.

“Every day, we send a disgraceful signal around the world, that this is what the present US government stands for, and that is torture and kidnapping of little children, separation from their parents and deprivation of those who are incarcerated.”

This is disgraceful! Not only is Trump simply expanding on a system that was put in place by his predecessors, he signed an executive order ending the separation of parents and their kids. Carter is spreading false information.

The separation of family members was happening as a natural result of detainment, not as an intentional act. It happened during Obama’s term as well. The left wants to portray the Trump admin as ogres down on the border waterboarding migrants.

President Barack Obama separated parents from their children at the border.

Obama prosecuted mothers for coming to the United States illegally. He fast tracked deportations. And yes, he housed unaccompanied children in tent cities.

For much of the country — and President Donald Trump — the prevailing belief is that Obama was the president who went easier on immigrants.

Neither Obama nor Democrats created Trump’s zero-tolerance policy, which calls for every illegal border crosser to be prosecuted and leads to their children being detained in separate facilities before being shipped to a shelter and eventually a sponsor family.

But Obama’s policy helped create the road map of enforcement that Trump has been following — and building on.

“It’s been going on for many, many decades and many years,” Trump said this week. “Whether it was President Bush, President Obama, President Clinton — same policies. They can’t get them changed because both sides are always fighting. …This is maybe a great chance to have a change.”