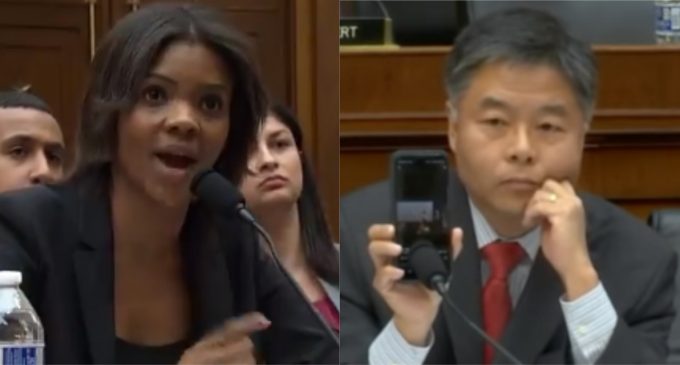 Democrat Congressman Ted Lieu's backside must still be hurting after a House Judiciary Committee hearing on white nationalism and hate crimes on Tuesday. After a shortsighted attempt to suggest that conservative commentator Candice Owens approved of Adolf Hitler and his ‘nationalism' through the use of selectively edited audio, Ownes handed Lieu his @ss.

During his remarks, Lieu noted that the minority party is allowed to choose its own witnesses for the hearing – and Owens was among eight witnesses selected.

“Of all the people that Republicans could have selected, they picked Candace Owens,” Lieu said. “I don't know Ms. Owens. I'm not going to characterize her. I'm going to let her own words do the talking.”

Lieu then played a short clip of Owens' previous remarks at a London conference in December, which were widely circulated in February: “I actually don't have any problem with the word ‘nationalism.' I think the defintion gets poisoned by elites that want globalism. Globalism is what I don't want. When we say ‘nationalism,’ the first thing people think about — at least in America — is Hitler. You know, he was a national socialist, but if Hitler just wanted to make Germany great and have things run well, OK then, fine. The problem is, he had dreams outside of Germany. He wanted to globalize. He wanted everyone to be German. …”