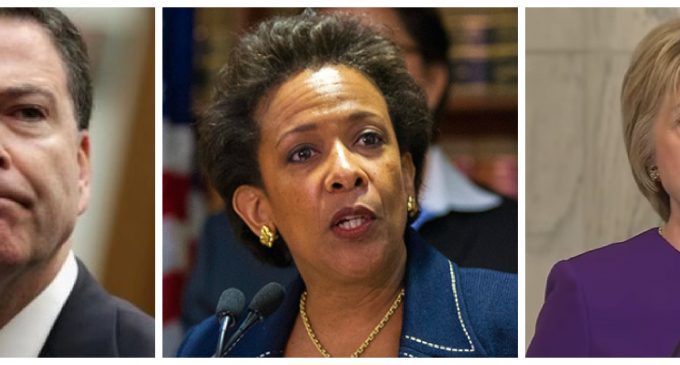 Can the Dems take down Trump without putting half the Obama Administration behind bars?

In the course of the investigation into the unsubstantiated allegations of Russian interference in the 2016 presidential election, serious evidence has emerged suggesting former Attorney General Loretta Lynch interfered with the FBI’s criminal investigation into Hillary Clinton.

3 shocking revelations were brought to light during Comey’s hearing that might just do the opposite of what the Dems were hoping for and be the nail in the coffin that starts the process of putting the entire inner circle of Obama’s closest confidants behind bars.

Although predictably under-reported by MSM, these revelations are so serious that former FBI Director Comey even encouraged the Senate Intelligence Committee during the infamous Trump hearing to appoint a special counsel into Lynch’s interference in the Clinton email investigation. Talk about a real case for the Senate to investigate! But, no, Obama was just being a good little boy obeying his master when he instructed his team to obstruct justice, not breaking the laws. How stupid do the Dems think the American people are?! You’ll find out on the next page along with all the other shocking info Dems are trying to keep secret