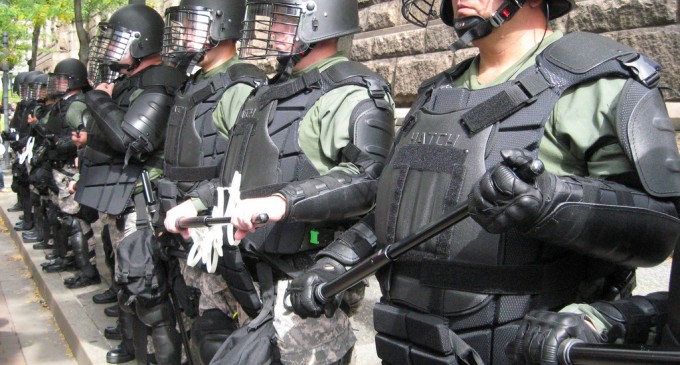 The APPS is sweeping through cities collecting guns from citizens deemed by the state to be ‘prohibited person'.

The state can deem someone as being unfit to be a gun owner if they are declared to be ‘a danger to himself or others'.

While this might seem to some to be warranted, it actually allows for wide-open, arbitrary abuse of our Constitutional right to bear arms, which will certainly happen in liberal California.

These goon squads, traveling in SUVs and dressed in black tactical uniforms typical of the new militarized police forces of America, will lock down someone's house declared ‘unfit', until a warrant is secured.

The police state is staring us all right in the face.

The State of California has moved one step closer to the leading edge of the American police state through the newly created Armed Prohibited Persons System. (APPS) The purpose of the unit is strictly gun confiscation. Guns are already endangered in California. There is a cascade of legal maneuvers from liberal centers across the state directed at eroding the gun rights of their citizens, incrementally, in keeping with the Democrat progressive model.

Based upon gun registration lists, the APPS sweeps through California cities seizing firearms from those designated by the state to be “prohibited persons.” The jackboots travel in SUVs and are dressed in the increasingly familiar black tactical uniforms typical of the new militarized police forces of America.

One does not have to be a convicted criminal to be targeted by the APPS. All that is required is the designation by the state’s Welfare system that the gun owner is “a danger to himself or others.”

The threshold for being designated such a danger is an arbitrary and subjective determination by agencies of a government notorious for its liberal bias. As such, there is a strong likelihood of abuse. Even absent abuse, nowhere in the second amendment does it authorize such a usurpation of our God-given right.

The searches are warrantless unless the target is insistent, at which point the goons lock down the house until a warrant is obtained.

Funding for the 36 member APPS is obtained through firearms purchase fees, another infringement upon the 2nd amendment.

To date, California is unique in its employment of special jackbooted teams trampling upon the Constitution, but not alone in the idea of preemptive civilian disarmament.

In 1999, Connecticut enacted a similar measure permitting police to confiscate firearms from any individual believed to pose “a risk of imminent personal injury to himself or to other individuals.” It is surprisingly easy to take someone’s firearms away under this law.

Any state’s attorney or assistant state’s attorney, or any two police officers can swear out a complaint. With that complaint, a seizure can take place, and the citizen’s weapons withheld for up to a year.  No criminal charges or civil action need be taken against the owner. Under this provision, thousands of firearms have been seized.

Recently, in Massachusetts, police and prosecutors didn’t even bother pretending that they were enforcing a law. They conducted a pre-emptive disarmament of Gregory Girard, a resident of Manchester-by-the-Sea based solely upon a complaint by his estrange wife.

She called health and welfare officials and reported that Mr. Girard held what she considered to be strange political views. She revealed to authorities that Mr. Girard was convinced that martial law, and the associated gun confiscation was imminent.

In light of those strange and irrational views, predicting government raids to confiscate firearms, government agents raided his home and confiscated his firearms.

The liberal areas are usually the first locations for implementing the most outrageous changes in the American fabric as there is minimal resistance and more popular support for these misguided ideologies. Once a foundation is laid in one geographic area, the creep across the nation continues.

The creep across America has already begun. They’ve made their first moves; the attack on our rights as sovereigns is underway.