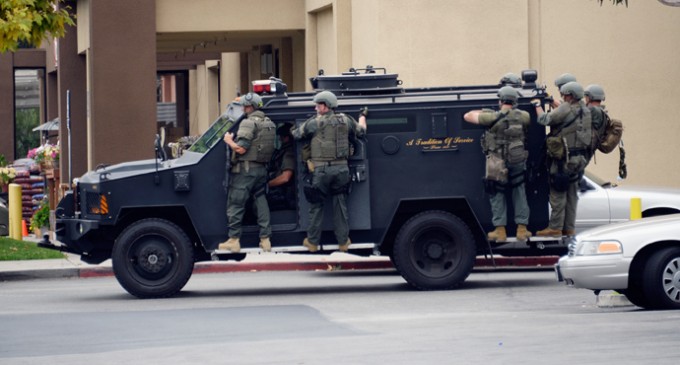 Citizens in Salinas, California are outraged at the recent gift given to their city by the military: a $650,000 military vehicle used in war that will patrol their streets.

“To stop gang members?” asked one person. “Hmmm gang members don't riot in mass numbers. It's right in front of our faces and we don't see it. Why would the ARMY!!! give something like that for FREE!!! Let's think for once people.”

Our police is becoming more and more militarized and these vehicles, making it onto our streets through the 1033 program, is just one more sign of the government's expectation of civilian uprising.

And, they are correct. If the federal government continues with their lawlessness, anti-constitutional abuses and the dismantling of our economy and our rights they will have a civil war on their hands.

Police in Salinas, California are under fire after the department acquired a heavily armored military vehicle for SWAT team operations.

The $650,000 vehicle was gifted to the Salinas Police Department from the government through the 1033 program, which redistributes used equipment to other agencies. According to KSBW, the truck was used in Iraq and Afghanistan.

According to numerous outlets, police stated their SWAT team was in desperate need of a new vehicle. KSBW added that the new truck, built to withstand rifle fire and minefield explosions, has already aided officers looking to arrest a dangerous suspect. The individual was apparently spotted via the vehicle’s high observation deck.

While Police Chief Kelly McMillin believes the vehicle “provides a high capability of protection for our officers and the community,” other members of the community have been outspoken in their disagreement.

Posting on the police department’s Facebook page, citizens criticized the acquisition as excessive, as well as a sign of the militarization of law enforcement.

“That vehicle is made for war,” wrote one commenter. “Do not use my safety to justify that vehicle,” another one wrote. “The Salinas Police Department is just a bunch of cowards that want to use that vehicle as intimidation and to terrorize the citizens of this city.”

“To stop gang members?” asked a commenter. “Hmmm gang members don't riot in mass numbers. It's right in front of our faces and we don't see it. Why would the ARMY!!! give something like that for FREE!!! Let's think for once people.”

In an interview with the Salinas Californian, McMillin said he wasn’t surprised at the reaction. However, he disagreed with the charge that the truck’s arrival suggested a more militant police force.

“An allegation that we are militarizing has to be that we were patrolling the streets in platoons in greater numbers, that we were setting up checkpoints and searching people in and out of neighborhoods,” he said.

McMillin acknowledged that the truck looks intimidating, but insisted it would only be used to protect officers and citizens alike. As commenters continued to criticize the move, however, the police chief took to Facebook and made another statement.

“Every man and woman in the Salinas Police Department took an oath to support and defend the Constitution of the United States,” he said. “We take that oath seriously. I thank God we live in a country where we can have this conversation, challenge each other, and challenge the government on how it does its job. Even though I may not agree with all of you, thanks for having a civil discussion.”