While other local governments work hard to attract new business to their regions; it seems the state of California really wants to drive business away. After 30 years of manufacturing the popular Sriracha hot sauce California has ordered them to cease operation for at least 30 days.  The reason: Sriracha is a raw food.  Even though there's no reported problems of their hot sauce ever containing bacteria or causing harm in the decades of selling their hot sauce.

This $60 million dollar a year business will now be closed because “Because Sriracha is not cooked, only mashed and blended, Huy Fong needs to make sure its bottles won’t harbor dangerous bacteria.” says the Pasadena Star News.  This is part of the ever increasing suppression of smaller food business.  It particularly impacts organic, raw and whole food type products, but why would the government attempt to suppress small healthy food manufacturers?  Did you know other regulatory agencies have gone so far as to raid dairy farmers to selling whole unprocessed milk to their local communities? 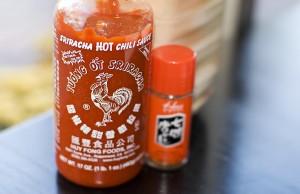 IRWINDALE>> The famous rooster sauce is in short supply this month thanks to a new state regulation that requires manufacturer Huy Fong Foods to hold its Sriracha for 30 days before shipping it.

Officials with the California Department of Public Health said a rule change affecting the company’s production procedure for Sriracha and its other two sauces became necessary after government officials reviewed the manufacturing process earlier this year.

“The regulations outlining this process have been in existence for years, but the modified production requirements were established for the firm this year,” state Health Department spokeswoman Anita Gore said in a written statement.

Because Sriracha is not cooked, only mashed and blended, Huy Fong needs to make sure its bottles won’t harbor dangerous bacteria.

The hold took effect on Monday, so Huy Fong can’t ship any of its product until the middle of January. This means a shortage of supply for many of the company’s customers.

“It’s a disaster,” said Damon Chu, president of Giant Union Co. “We’ve done business with them for 20 years and we’ve never had this kind of thing before. We get shipments every two to five days and we never had any thought of them saying they don’t have it, so we don’t store that much.”

Chu said his Whittier-based company, which ships out the three different Huy Fong sauces to wholesale distributors, has no Sriracha left. The impending shortage could affect businesses that serve everything from spicy tuna rolls to hot dogs and pizza.

Many of Chu’s customers are already upset about the Sriracha shortage.

“We have contracts with them and if we don’t supply it they are going to sue us,” Chu said. “We are trying to convince them it’s not our fault. We are kind of nervous.”

Donna Lam, executive operations officer for Huy Fong Foods, said the company has been fighting stricter regulations, but gave in this week.

“It’s not a bad product, that’s not the issue. It’s strictly regulations,” Lam said. “We’re back ordered as it is but now we have to tell customers we aren’t sending anything until mid-January.”

Lam said the company has been saddled with the hold rule since it began production at its 650,000 square foot factory in Irwindale. Previously the spicy condiment had been manufactured for 30 years in Rosemead.

The shipping halt is just the latest in a series of setbacks for the chili sauce giant. Huy Fong is in the midst of a legal battle with the city of Irwindale after residents complained of odors coming from the factory. An L.A. judge ordered the company to stop production unless they could reduce the smell.

Despite the panic by some distributors, others weren’t too concerned.

Eric Greenspan, chef at The Foundry in Los Angeles, said he loves the famous rooster sauce, but would be able to get by if there were a temporary shortage.

“If I have to mix Tabasco and ketchup for a day or two I will,” said Greenspan, who participated in this year’s first-ever L.A. Sriracha Festival.

Greenspan said he thinks the Sriracha crisis is getting a bit extreme.