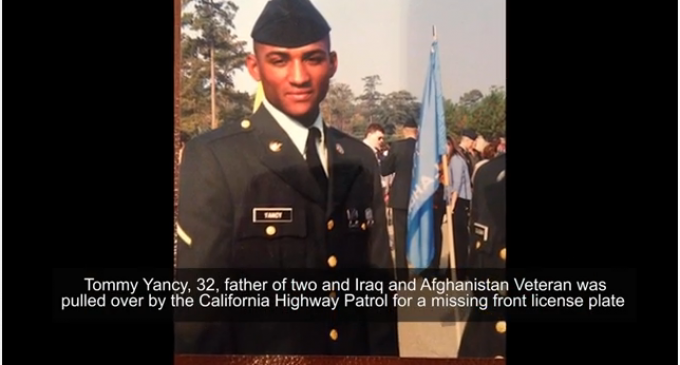 Tommy Yancy, veteran of the Afghan and Iraq wars and father of two, was beaten to death by CHP after they pulled him over for not having a front license plate in Imperial, CA, this past Sunday, Mother’s Day.

A witness to the event claimed he was not resisting arrest at all, but was first attacked by a police K-9, hit with a taser, and then beaten by five officers until he died.

Another witness said that Tommy Yancy was “mad” and “uncooperative” during the traffic stop, but that police went too far in their beating.

A close friend of Yancy described him as “shy, and a comedian” an “excellent dad, who kept in contact with his army buddies every week.” His sister-in-law, Jaqueline Hernandez, described him to as “a very loving guy, loved his kids to death… they were his everything. Very funny down to earth guy, and loved by all”.

I don’t care if this man was belligerent, you don’t kill people for belligerence or even for taking a swing at an officer, especially when there are 5 cops around who can easily subdue him.

The incidence of police brutality in this country is skyrocketing as we see the federal gov’t arming themselves to the teeth, our Constitutional rights stripped and gun control measures being enacted across the country.

The government is conditioning us to ‘absolute domination or suffer the ultimate price’ by hiring these thugs and turning them lose on society.

There is so much rampant police brutality now it almost seems that brutalizing and killing people is part of some initiation process.

You can voice your complaint to the district attorney in Imperial, CA at this number: 760-482-4331