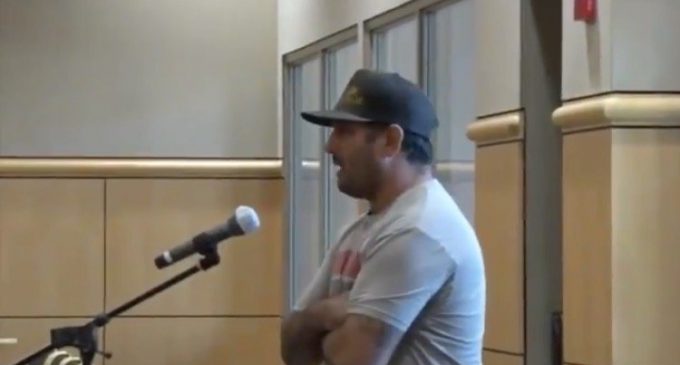 Residents and business owners in Shasta County, California have had it with COVID lockdown orders and have but the Board of Supervisors on notice: re-open and lift the ridiculous mask mandate or, as one veteran and business owner put it, things would not be ‘peaceful’ much longer.

“Our local health officer has not made any restrictions over and above what the state of California has, so we are doing all that we can to keep the county as open as possible,” Shasta County Health and Human Services Agency Director Donnell Ewert said, according to Redding.com. “We are one of roughly 20 counties that still are not on the (state) monitoring list…so Shasta County is open; it is, again, in the category of most open counties in California.”

Ten people have died from Coronavirus in the Northern California county so the residents have had it with the tyranny.

More than 80 citizens spoke last week asking the Board of Supervisors to open up Shasta County, but one business owner stood out for his bravery and stern warning to the tyrants.

Carlos Zapata issued a rather stark warning that citizens were about to break the peace because their families were ‘starving.’

“At first we sat as concerned citizens….as we realized that [Covid] is not as quite as dangerous as we thought it would be, I was absolutely appalled at the cowardice — and you guys are sitting here with your masks on — I don’t blame you for wearing masks because I would be hiding my face if I was you for what you’re doing,” Zapata said.

He continued, “I’m a business owner and I’m telling you, our families are starving — you guys can sit here with your jobs — you’re gonna sit here and get paid to fall asleep in your chair like that gentleman’s doing behind his mask right there.”

Zapata then put the officials on notice.

“Right now we’re being peaceful and you better be happy we’re good citizens, that we’re peaceful citizens but it’s not gonna be peaceful much longer — and this isn’t a threat — I’m not a criminal, I’ve never been a criminal but I’m telling you real good citizens are going to turn into real concerned and revolutionary citizens real soon. And nobody else is gonna say that. I’m probably the only person that has the balls to say what I’m saying right now.”

“This is a warning for what’s coming because it’s not going to be peaceful for much longer! It’s gonna get real!” Zapata said adding he went to war for this country and he’s ready to fight for this country even if it’s against its own citizens.