The alleged puppet master of the Trump-Russia conspiracy theory, former Obama CIA Director John Brennan, said on Friday’s broadcast of MSNBC’s “Rachel Maddow Show,” that he didn’t mean President Trump committed treason when he referred to the president’s performance at the Helsinki summit as “nothing short of treasonous.”

Brennan originally claimed in a Tweet that treason was committed after President Trump met with Vladimir Putin in Finland. 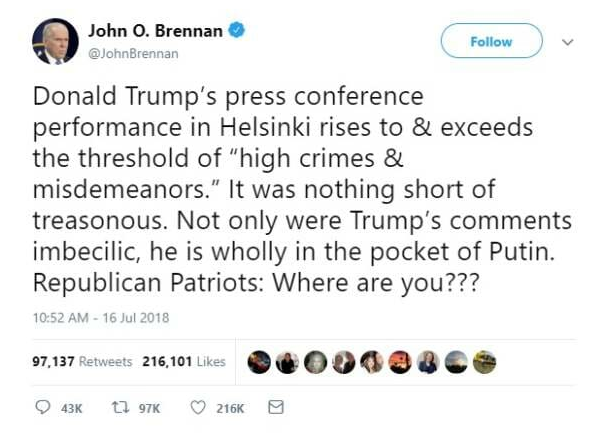 It was a ridiculous statement, to say the least. The left and the swamp creatures that control them love to toss words around like this to rile their base. Of course, nothing Trump did in Helsinki and nothing he has done otherwise would qualify as treason. For whatever it’s worth, here’s the legal definition:

“Treason against the United States,” says Section 3 of Article III of the U.S. Constitution, “shall consist only in levying war against them, or in adhering to their enemies, giving them aid and comfort.” It’s the only crime explicitly defined in the nation’s founding charter. The framers clearly wanted it used sparingly, declaring that “no person shall be convicted of treason unless on the testimony of two witnesses to the same overt act, or on confession in open court.”

Turn the page for videos of Brennan backtracking on the accusation only then to turn around and double down on it. This is one confused man on the marsh.