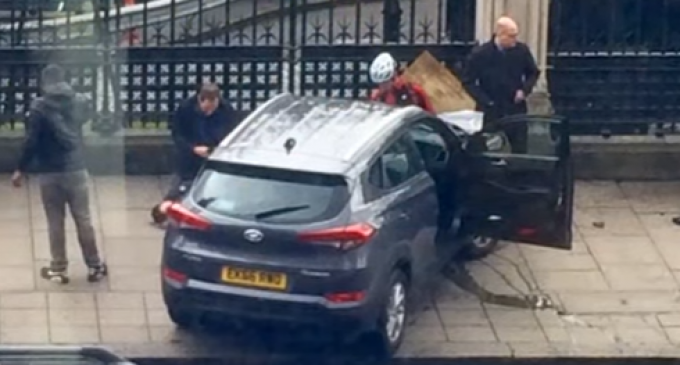 One woman has died and several have ‘catastrophic injuries' as reports of pedestrians being knocked off the edge of the Wesminister bridge during horrific incident that is being deemed a terrorist attack.

The attacker has been described as a “middle-aged” Asian man who was reportedly shot after mowing down a crowd of people by what is believed to be a 4×4 car on the bridge.

The driver got out of the vehicle following the attack and managed to break into the grounds of the Houses of Parliament before stabbing a cop with an eight-inch knife.

Witnesses have recounted how one person was thrown over the edge of the bridge and others left bleeding with horrific head wounds.

A witness told The Sun Online: “I was just walking up to Parliament just about to walk in the steps.

“I wasn't looking when it happened but I saw the aftermath. (The driver) just went on the pavement and trampled a lot of people.

“There was a woman at the top of the steps her head was just pulsing with blood and bleeding out and there was another woman who flipped over the side of the bridge.

“She was not in a good state and there were a load of bodies on the road.

Rob Smith was running past Westminster when he said he saw the drama unfolded, said: (The) grey Hyundai car came across the bridge then across the cycle lane, hit a man on a bike and drive into the wall gates.

“Police ran straight out and shot him. I think there was another person but I can't be sure.”

He said that officers had been drawing their guns as they ran out.