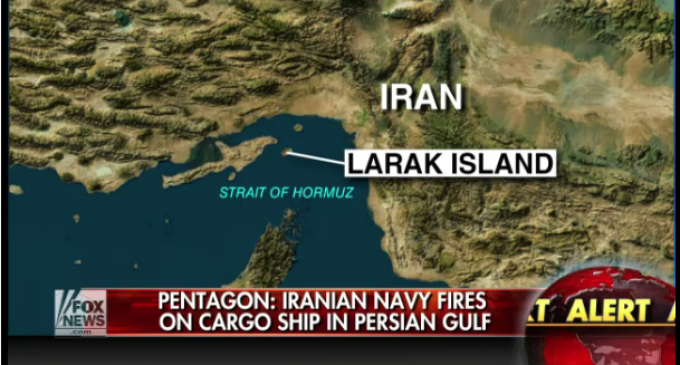 Initial reports claim that Iran has seized a US cargo ship, but according to the Pentagon, the ship was not American and no Americans were aboard. Fox News reports that the ship is from Denmark.

The Maersk Tigris ship — originally heading to Jebel Ali in the United Arab Emirates, is now being escorted by the Iranian Navy into waters near Bandar Abbas, home of Iran’s largest Navy base.

The USS Farragut, a guided missile destroyer, is making “best speed” en route to the area and has dispatched a helicopter to get a closer look, the official said.

Col. Steve Warren, a Pentagon spokesman, said the cargo ship’s master had initially refused an Iranian order to move further into Iranian waters, but after the warning shots were fired the Maersk Tigris complied.

The cargo ship, which had more than 30 people aboard, was directed to waters near Larak Island, he said. The position of the Maersk Tigris Monday while being escorted by the Iranian Navy. (MarineTraffic.com)

“It is inappropriate” for the Iranians to have fired warning shots across the ship’s bridge in those circumstances, Warren said, adding that it was too early to know whether the Iranian intervention amounted to a violation of the freedom of navigation through a waterway heavily used by international shipping.

The spokesman said the U.S. government has “certain obligations” to defend the interests of the Marshall Islands, but he was uncertain how those obligations apply in this situation.

Warren said no one has been injured and no Americans are involved. The cargo ship issued a distress call and U.S. Naval Forces Central Command, based in the area.

A Maersk spokesman told Fox News that although Maersk, a Danish company based in Copenhagen, owns the vessel, it had “chartered” the ship to Rickmers Ship Management based in Hamburg, Germany. Maersk said it had no information about the crew or the cargo