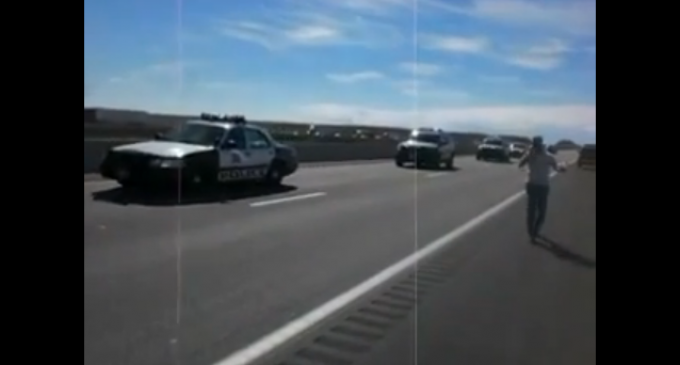 It's still too early to determine what exactly is going on, but at first glance this appears to be a double-cross by the feds, which was actually predicted by private investigator Doug Hagmann, who issued a statement that one of his sources inside DHS informed him there would soon be a raid following a ‘strategic de-escalation'. It appears he was right.

Despite the announcement by Clark County Sheriff Douglas Gillespie on Saturday that the BLM had agreed to cease its actions against Cliven Bundy, the BLM now states that they played no part in the deal and will continue to pursue Bundy “administratively and judicially” for the $1 million in grazing fees they claim Bundy owes the federal government.

“The BLM and National Park Service did not cut any deal and negotiate anything, there was no deal we made,” states Craig Leff, spokesman for the BLM.

Bundy has made it abundantly clear he has no intention of paying the fees, that he doesn't acknowledge that the federal gov't even exists. “I abide by all state laws. But I abide by almost zero federal laws,” he explained.

We're headed for a grander confrontation here folks and will keep you informed as information comes in.

Despite being forced to release hundreds of seized cattle after an astounding standoff on Saturday, the Bureau of Land Management has vowed to continue its pursuit of Cliven Bundy, asserting that no deal has been made to cease its case against the Nevada cattle rancher.

Amazing scenes unfolded on Saturday as Bundy supporters and cowboys on horseback faced off against armed BLM agents and police, demanding that hundreds of cattle seized by the BLM over a grazing rights dispute be released from a nearby corral.

With feds and law enforcement at one point threatening to shoot protesters dead, Bundy supporters fearlessly held their ground and then began advancing on the corral.

Around 380 cattle were eventually released and BLM agents left the scene, a remarkable victory for property rights activists against big government. However, the ‘battle of Bunkerville’ as it is now being called is unlikely to mark the end of the saga.

Despite Clark County Sheriff Douglas Gillespie announcing on Saturday that the BLM had agreed to cease its operation against Bundy, the BLM now asserts that it played no part in the deal and will continue to pursue Bundy “administratively and judicially” for the $1 million in grazing fees it claims Bundy owes the feds.

Since Bundy has steadfastly refused to pay the fee, offering instead to pay it to Clark County, the feds will have no option other than to send armed men to arrest Bundy or restart the operation to confiscate his cattle. Such action will then prompt thousands of Americans to rally to Bundy’s defense just as they did last week, threatening another standoff.

“The door isn’t closed. We’ll figure out how to move forward with this,” BLM spokesman Craig Leff told the Associated Press, adding, “The BLM and National Park Service did not cut any deal and negotiate anything, there was no deal we made.”

This completely contradicts reports on Saturday which stated that, “A deal has been reached between the Bundy family and the Bureau of Land Management.”

In another twist, private investigator Doug Hagmann claims a Department of Homeland Security source told him that the federal stand down on Saturday was merely a temporary measure designed to “hoodwink” Bundy supporters into “believing that the situation is being resolved”.

Hagmann says his source told him the plan to release the cattle had been devised the day before and that Saturday’s activities were focused around a military assessment of the strength of the “resistance” shown by Bundy supporters.