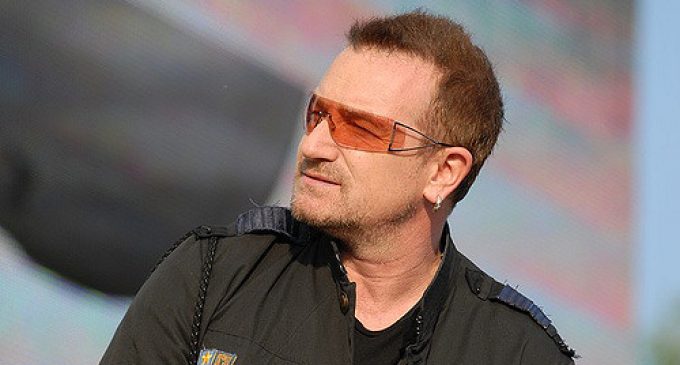 Open Borders Bono is relentless in his efforts to import as many migrants into Europe as possible. He has even arrogantly called upon the U.S. taxpayer to help foot the bill.

“I know the American taxpayer is really hurting at the moment and the same in Europe,” Bono said. “But I think between Europe and America there is a consensus building that, you know, the corruption that’s killing as many kids as disease can be dealt with by structuring these concessional loans on the conditions that these countries that we give them to reform.”

And that pesky terrorism issue? Well, Bono has that all figured out…just send in Jewish comedians and homosexuals as some sort of repellant.

“It’s like, you speak violence, you speak their language. But you laugh at them when they are goose-stepping down the street and it takes away their power. So I am suggesting that the Senate send in Amy Schumer and Chris Rock and Sacha Baron Cohen, thank you.”

Amy Schumer and Sacha Baron Cohen are both Jewish – a faith to which ISIS (and Al Qaeda and Boko Haram et al) have not hitherto shown themselves to be particularly sympathetic. On the contrary last year ISIS announced that they were planning a Second Holocaust in which all the world’s Jews would be extinguished. Perhaps Bono is under the impression that Amy Schumer’s wit would grant her an exemption – though up and until now there has been little evidence that ISIS has much of a sense of humour.

Nor do Islamic terror groups respond terribly well to homosexuals like Bruno, the camp Austrian played by Baron Cohen; or even to people who look like they might be homosexuals, such as Borat, when he is wearing his mankini. Their preferred method of dealing with them – in accordance with their scriptures – is to throw them off high buildings or bury them beneath a wall.

It’s currently unclear what version of reality Bono is living in, but it definitely isn’t this one.

But Bono is not just a man spewing out insanities, take a look at what his NGO “One” is up to on the next page.