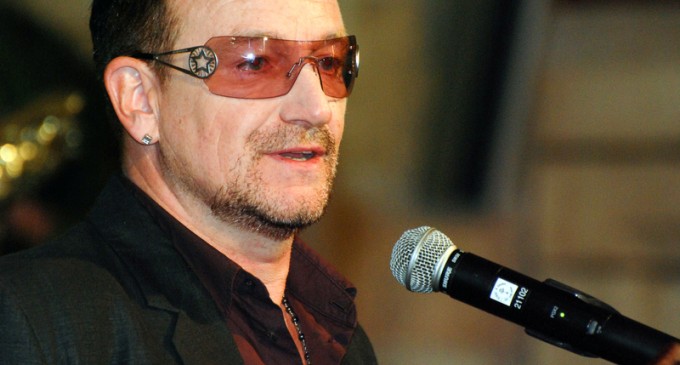 What is it about fame that makes celebrities feel they're qualified to be making political suggestions? And why do people listen to them?

Much like Area 51 and President Obama's birth certificate, those are two of America's greatest mysteries. For example, Bono of the band U2, has said and done some monumentally stupid things in the past. But his latest act is on a whole different level. Apparently being a washed up rock star qualifies him for instructing Congress on how to solve the global refugee crisis and Islamic Extremism.

According to Bono, the West can solve the refugee crisis and Islamic Extremism with humor and generosity. While delivering his suggestions to the Senate appropriations subcommittee on Capitol Hill, he made the following suggestions: He insisted that the West needs to welcome more refugees from North Africa and the Middle East. Second, he claimed that instead of using violence to combat Islamic extremism, we should use humor and kindness.

Okay, so let's send him out to test his own suggestion. Find out why this is a bad idea on the next page…besides the obvious reasons.