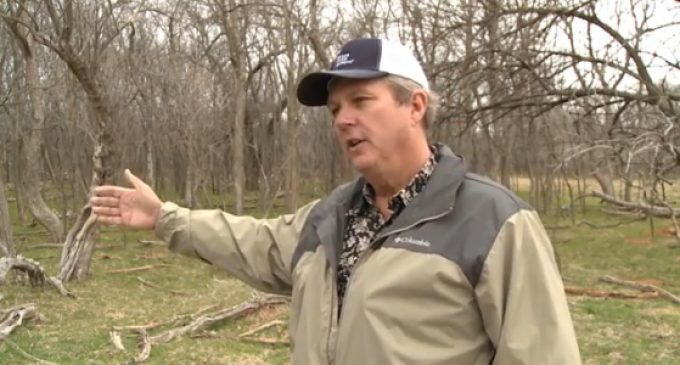 The Bureau of Land Management is in the process of stealing another ranchers land.

Tommy Henderson has already lost land to the BLM and is currently fighting their latest attempt to take his property, “How can BLM come in and say, ‘Hey, this isn’t yours’?” Henderson asked. “… Our family paid taxes for over 100 years on this place. We’ve got a deed to it. But yet they walked in and said it wasn’t ours?”

BLM uses the fact that the border between Texas and Oklahoma, which is the Red River, constantly changes, to claim the land. They have already seized 140 acres of land, now they are trying to seize 90,000 acres and substantially change the border between the two states.

“Originally, here the river was out there where it is now and it eroded and accreted up to here, and then it eroded and accreted back. Well, [BLM’s] interpretation is that it eroded up to here but avulsed back. So when you listen to them it is always erosion to the south because the property line follows it then, but it’s always avulsion when it goes north. So the boundary can move south but it can never move back north,” states Henderson.

“We have numerous places that have been in our family for over a hundred of years, and you hate to see land that people’s worked hard for would lose. As producers we are always on a defense. We have to make decisions to try to help ourselves to help one another.”