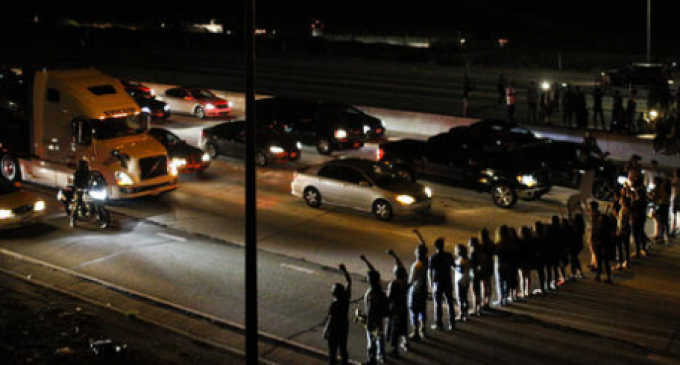 Los Angeles is no stranger to protestors shutting down freeways and major highways.  The list of riots and protests include Watts, Rodney King, Ferguson, Trump Rallies, and just this past weekend, Black Lives Matter blocking traffic on the 405 freeway.

Inglewood Police Lt. Gregory Held reported that there was no reason for the authorities to interfere as, “It's all been peaceful.”  There were no arrests or violence reported.

Hundreds of Black Lives Matter demonstrators flooded the Inglewood streets late Sunday night, intent on blocking the traffic on the 405 and major intersections, with their message of “black lives, we matter, yeah” and “racist cops have got to go.”  The traffic on the 405 was stopped for around 10 minutes, both north and south bound lanes were blocked by a human wall.

The mass of humanity moved up the on ramp at La Cienega Boulevard and became part of greater demonstration taking place on Manchester Boulevard.

View video on the next page.