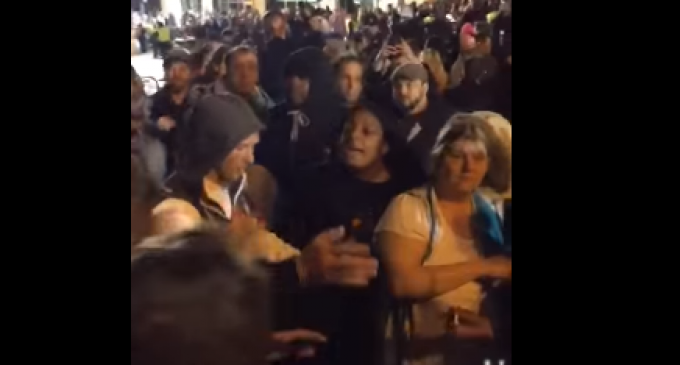 The anti-Trump crowd has abandoned any pretense of civility and is now both verbally and physically disrespecting attendees at Trump campaign events.

Just this week, waves of Black Lives Matters protesters mobilized to demonstrate against a Trump rally in Albany, New York. Even after the event ended, they waved picket signs and shouted insults at peacefully assembled supporters.

Going back and forth with attendees who refused to let their put-downs go unchallenged, one protester got into a heated exchange with a female Trump supporter. Nobody resorted to violence, but what the protestor did was almost just as bad if she had actually assaulted the Trump supporter.

Apparently enraged that anybody would defend the GOP frontrunner, the protester pursed her lips and proceeded to spit at the woman she was arguing with. The protestor was quickly pushed away by another rally attendee while their fellow agitators promptly shielded her as she beat a hasty retreat.

Watch the video for yourself on the next page: