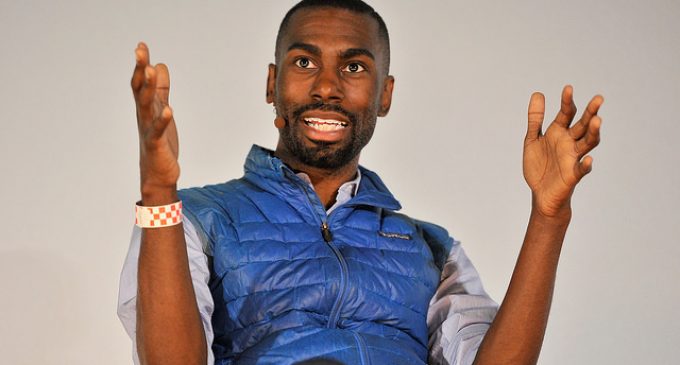 Black Lives All Matter Enormously (or BLAME) was a spontaneous movement that was birthed in the violent aftermath of the George Zimmerman acquittal (you remember CNN calling him the “White Hispanic”) for his shooting of Trayvon Martin.  On its website, it claims to rally against violence, but there are countless examples on video of the BLAME movement committing violent acts not only on cops, but on Whites and Hispanics as well.

One of its self-appointed leaders, an affluent, wealthy man named DeRay McKesson, who has a very lucrative job at a cool $165K a year as the Baltimore school district's chief of human capital, managing 56 government workers with a budget of $4M, lives in a very nice-looking private mansion owned by members of George Soros' Open Society ultra-Leftist anti-American organization.

While McKesson appears to be a self-motivated individual with much more business savvy than your average anti-First Amendment everyday Joe, he does seem to be a bit short in the intellectual department as he has recently shown a penchant for merely inciting racial hustling type propaganda, rather than substantive arguments against what he deems is police brutality.  As has been pointed out in essay after essay, poll after poll, and statistic after statistic, White police officers shoot White perpetrators more than Black suspects by a much wider margin than what is typically alluded to by the MSNBCs and the Huffington Posts of the world.  Despite this, the constant narrative must be kept up in order for men like McKesson to continue to live off the misery of others (and make a hefty paycheck to boot).

McKesson is one of those people who lives moment to moment, seeing racism and injustice around every corner.  He envisions, not only himself as a victim, but also every single person of color (preferably Blacks and not Hispanics) as victims so that the perpetuation of the cycle of perceived oppression can be complete.  Let's be honest:  without discontent, civil unrest, chaos, and the inciting of riots, McKesson is out of a job.  Since he no longer earns the Baltimore school district salary, he must rely on something more tenuous, but that which requires him to be much more engaged (if he wants to keep the money flowing into his bank account).

Still, with his house being provided for by Uncle Georgie, there's a lot of employment anxiety wiped away from his mind to make room for more important endeavors; like teaching young impressionable Black youths how to create their own “Kill the Pigs!” signs and how to punch someone without getting arrested.  There's even the newest method of ensuring that you make a big impression by adopting the latest taser technique perfected by sister group, the New Black Panthers.  Don't like a cop?  Tase him!  That'll teach them to try to keep order on the streets.

Now, the self-appointed leader of the BLAME movement has topped previous dumb statements by showing a complete (and quite frankly inexcusable) ignorance of old classic films from the 1960s and '70s.  Wait till you see what fashion trend this guy thinks he started!