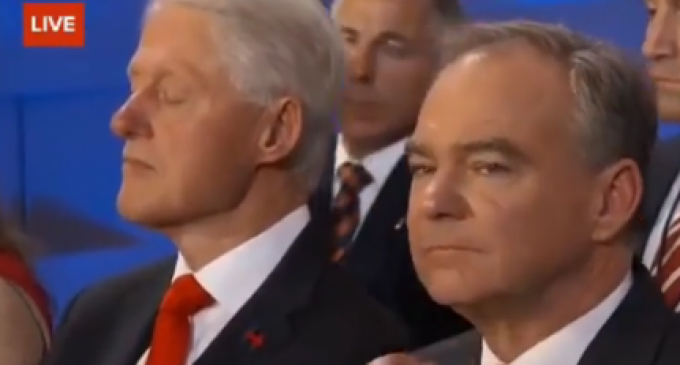 If the Democratic National Convention was successful — and that is debatable — it was in spite of Hillary Clinton, not because of her. If anything, her absence from the majority of the convention is likely what kept everybody awake. Unfortunately, they couldn’t keep Clinton off the stage forever.

When Mrs. Clinton wasn’t on stage, attendees were kept entertained by Katy Perry performances, Black Lives Matter protesters, and the legions of Bernie Sanders supporters who couldn’t let go of the “political revolution” that even Sanders himself had abandoned.

When Mrs. Clinton finally took the center stage at her own convention, it seems she couldn’t even keep her husband, Bill, awake.

This is hardly surprising, as Mrs. Clinton is hardly a vessel for enthusiasm. Still, it is as least a bit impressive that Mr. Clinton could sleep while she constantly shouted at America.

See the video of his alleged nod-off on the next page: