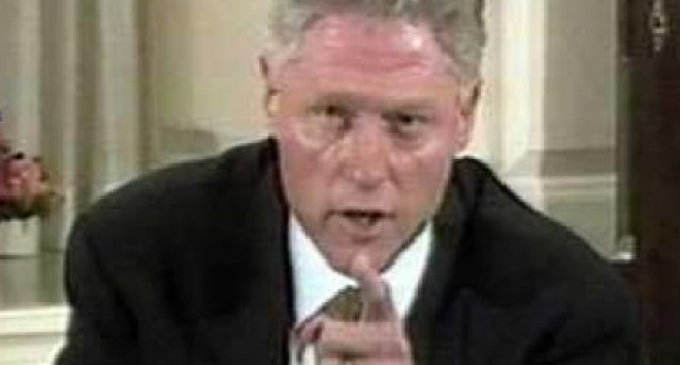 Bill Clinton was right to be paranoid of the right wing using the Internet to expose his and Hillary's crimes.

3 years after the infamous 1995 “conspiracy commerce memo” tried to invalidate alternative media outlets, Matt Drudge broke onto the scene with the story of Clinton's ‘inappropriate' relationship with a White House intern – and that Newsweek killed the story to protect its ally in the White House.

“The right wing has seized upon the Internet as a means of communicating its ideas to people. Moreover, evidence exists that Republican staffers surf the Internet, interacting with extremists in order to exchange ideas and information,” states the newly released memo.

Now, 15 years later, we are still exposing the Clinton crimes as more and more people are becoming aware of just how criminal and downright evil members of our government actually are, now that we are free of the mainstream media propaganda machine.

Three years before Matt Drudge changed the world and how news would be consumed, President Bill Clinton's White House feared that the Internet was allowing average citizens, especially conservatives, to bypass legacy gatekeepers and access information that had previously been denied to them by the mainstream press.

The memo notes that the “Internet has become one of the major and most dynamic modes of communication” and “can link people, groups and organizations together instantly.”

“Moreover, it allows an extraordinary amount of unregulated data and information to be located in one area and available to all,” the memo states. “The right wing has seized upon the Internet as a means of communicating its ideas to people. Moreover, evidence exists that Republican staffers surf the Internet, interacting with extremists in order to exchange ideas and information.”

The memo talks about the media frenzy, the blow back strategy, and slams outlets unfavorable to the Clinton White House as “sources without credibility” before calling Richard Mellon Scaife the “vanguard” of the conspiracy movement that spread stories and “theories” about Jennifer Flowers, Paula Jones, and Vince Foster.

“Scaife along with a handful of other wealthy individuals and foundations use their power to control the Republican Party's agenda and viewpoints,” the memo says. “Scaife, in particular, is one of the major backers of Newt Gingrich. Interestingly enough, Gingrich's views on Vince Foster seemed to dovetail with Scaife's following Scaife's pumping of thousands of dollars into Gingrich's GOPAC's coffers.”

Drudge forever changed journalism in January of 1998 when he reported that Bill Clinton had a sexual relationship with a White House intern and that Newsweek killed the story to protect its ally in the White House.

As former Alaska Gov. Sarah Palin, who has pioneered the use of social media to get her message out, has said, the “new media rose up precisely because the old media failed to tell the truth.”

“That very first new media breakthrough was about 15 years ago when this lowly little store clerk in a lowly little apartment equipped with his computer and a modem broke one of the biggest stories of the decade. His name was Matt Drudge and the rest is history,” she said. Palin added that the establishment “denounced Drudge as irresponsible and unprofessional and even dangerous and anti-everything from motherhood to apple pie.”

“How dare that nobody from nowhere without a degree or a pedigree try to influence the national discourse? But the real reason they feared him was because he wasn’t beholden to the old media’s machine and the Thought Police. Unshackled, he was free,” Palin explained.